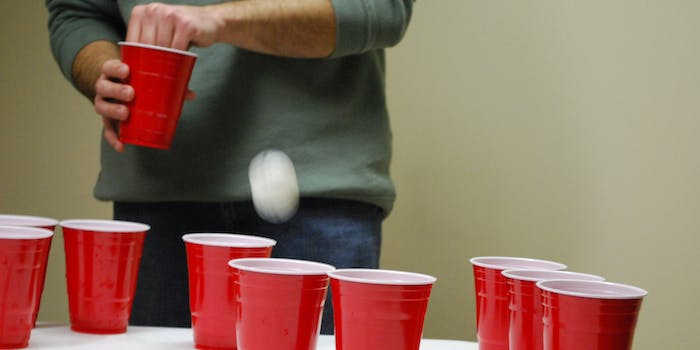 Teenagers like to drink. They also like to have sex. Sometimes, they like to do both at the same time. This is especially true in Long Island, which for the uninitiated, is basically like the modern-day Wild West of America, except with more strip mall tanning salons and girls who wear leggings as pants and pronounce words like “coffee” with at least eight syllables.

Parents, however, are apparently under the impression that their little angels are spending their formative years studying and knitting sweaters from Grandma, rather than passing out in the backseat of some ska bassist’s Mazda in the parking lot of a 7-Eleven. That’s why they’re getting up in arms about @LIPartyStories, a (sometimes NSFW) Twitter account where Lawn Guyland teens share photos of themselves drinking, doing drugs, and peeing in places that aren’t toilets.

According to Fox 5 News reporter Liz Dahlem, high school students all over Long Island are “posting pictures of themselves drinking under age and doing inappropriate things” on @LIPartyStories, which she says has an “unsettling” 22,000 followers.

One photo features “a West Babylon teen passed out in a stairway,” while another depicts “one high school student from Wantagh…with her pants down urinating in a sink wearing a happy birthday tiara.” Which, if you know anything about Long Island, is basically the classiest thing that’s happened there since the birth of transcendentalist poet Walt Whitman.

Dahlem (whose report gives you the distinct sense that she was the kind of kid who volunteered to chaperone at her own prom) urges concerned parents to log onto their child’s Twitter account and see if they’re following @LIPartyStories. If parents discover their children are following the account, they should unfollow it immediately, because everyone knows that if you follow or unfollow someone on Twitter, it’s permanent and can never be undone.

If this description has piqued your interest, and you want to see the crazy shenanigans kids these days are up to, here’s a sampling of some of the images on @LIPartyStories. Warning: if you are not a person who has lived in the world, these photos might be shocking to you.