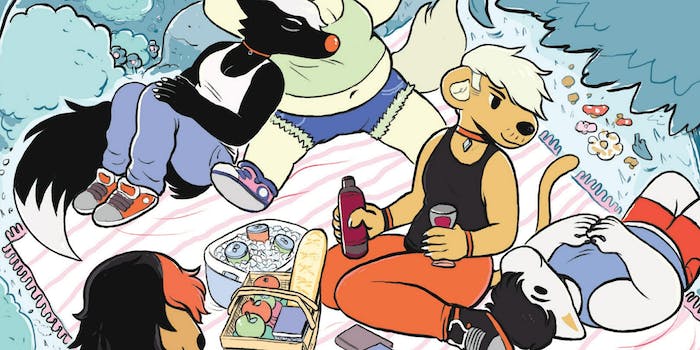 ‘Little Teeth’ is a tribute to 20-something queer growing pains

Four years later, the webcomic classic is now a book.

Bathroom hook-ups. Poly drama. Queer girls burying their feelings. Zines, chapbooks, and art exhibits that are glorified subtweets about perceived wrongdoings. I’m not describing my Twitter timeline, although I might as well be. No, these are just some of the daily happenings in Woodlands, the Seattle-ish setting for Jae Bearhat and Rory Frances’ webcomic Little Teeth, which this month is finally available in print thanks to Czap Books.

Bearhat and Frances came up with Little Teeth back in 2015 as a serial story for Hazlitt. The series follows anthropomorphic animals going about their lives in their queer-furry hub, doing everything from grabbing a diner lunch with friends to having sex at a local bathhouse. And while there are several characters that its stories follow closely—particularly a fox girl and wolf boy grappling with distinctly separate, yet eerily parallel, relationship issues—Little Teeth doesn’t treat any of its characters as perfect, infallible queers. These talking animals are going through some serious shit, and that means they’re equally capable of hurting others and being hurt themselves.

I first came across Little Teeth in early 2016 when I was “part-timing” my transition, so to speak. I was finishing my senior year at Rutgers, where I would enter class presenting as a boy, go home, rip the mask off, and go out with friends presenting as a girl. It was exciting but lonely, too. I didn’t know many people in real life who were dorky, nerdy queer trans girls.

So I coped through stories. I devoured games, books, Twines, podcasts, and comics about being trans. I read Imogen Binnie’s Nevada and Casey Plett’s A Safe Girl to Love, longing for its queer communities. I played my friend Arielle Grimes’ BrokenFolx and saw my future self in its hurting femmes. I read queer games criticism like ZEAL, where I wrote about growing up with gender dysphoria and thirsting over Metal Gear Solid’s Raiden (which Bearhat helped me explore as my editor). ZEAL led me to Bearhat’s Twitter, and their Twitter led me to Little Teeth. I fell in love with its characters. No, scratch that. I needed to know its characters. As chaotic and painful as things could be in Woodlands, I wanted to experience queer living myself, in all its highs and lows.

Stories are a funny thing. If you read enough of them, you’ll push yourself to create some of your own. So it was in early June 2016 that I hopped on the train to New York and rode the L to a queer poetry reading in Williamsburg. Two months later, I joined Topside Press’ inaugural (and only) literary workshop for trans women, and after that, I couldn’t pull myself away from New York. I moved to Brooklyn that October, kickstarting a lengthy journey of my own to build a sense of community among other queers.

Three years after that summer poetry reading, many of my fellow attendees are now my friends or coworkers. One person offered me their apartment as a sublet, which is how I moved to Brooklyn. Another’s partner helped land my girlfriend her job. The reading’s host became a friend of mine, and for a (very) short time, we ran a trans writing workshop together. And then there are all the parts I’m leaving out: the people there who I hooked up with, that I got into fights with, that I subtweet on Twitter, and who subtweet me back.

If I were to map out all of these connections to the various people at that June reading, from its guests to its hosts, they would be complicated and messy, like a spiderweb woven together by thin silk and yet frayed all over. Years of being cohabitants in a community causes both intimate closeness and uncomfortable conflict. But there is rarely a “right” or “wrong” side when people fight. Usually, it’s just queers figuring shit out.

In June 2016, I interviewed Bearhat and Frances for a story on Little Teeth for Bitch Media. When I circled back three years later, I asked them whether it was “raw or painful” to capture all the nuanced problems that queer people experience in their friend groups. Frances instead suggested that people “are always going to be people, with all their complexities and ups and downs.”

“I wouldn’t say it’s painful for me personally, it’s weirdly soothing to just chat about life while we’re working on it,” Frances told me. “But I know what an emotional minefield it can be when someone is young and queer and meeting other young queer or protoqueer people and everyone has all sorts of unprocessed issues and micro-conflicts going on. Which I should be clear, is not dismissive in any way. It’s real!”

It definitely is. When I first read Little Teeth in 2016, I had a hard time relating to the fox girl that dumps her ex at a rave. I thought it was a total dick move on her part, and I didn’t particularly mind when her ex squeezed her way into their polycule. Three years later, I feel really bad for fox girl. I’ve dumped my dates in awkward, uncomfortable ways. I’ve struggled to open up about my feelings to others. And instead of working through my jealousy and insecurity, I’ve pushed it down until my feelings explode. I’ve seen both sides of fox girl’s story, and I don’t judge her for her actions. I just feel bad for her.

“A big goal was to have it so who you empathize with and whose behaviors you can kind of understand would reflect your own experiences either being that person, or talking to that person, or even being hurt by that kind of person,” Bearhat said. “We didn’t want anyone to be ‘bad,’ except maybe Swampboy, but we did want most of the cast to, like, not entirely have themselves together.”

I know Little Teeth does this well because I can see myself in its stories. I’m the confident writer who gets social anxiety at house parties and collapses into a weeping mess. I’m the high-energy, nerdy gerbil who only knows how to crush on people from afar. I’m the laid-back queer public figure that has to hold others at arm’s length to protect my privacy. And yes, I’m also Swampboy from time to time: annoying, selfish, appearing at unexpected times, obliviously unaware (or unconcerned) how my behavior impacts others.

These are all parts of me that weave together into the complicated person that I am. Little Teeth makes me feel like I’m not crazy, not an asshole, just a queer figuring myself out as I go. And that’s OK. As long as I’m trying, there’s always a new story to explore.