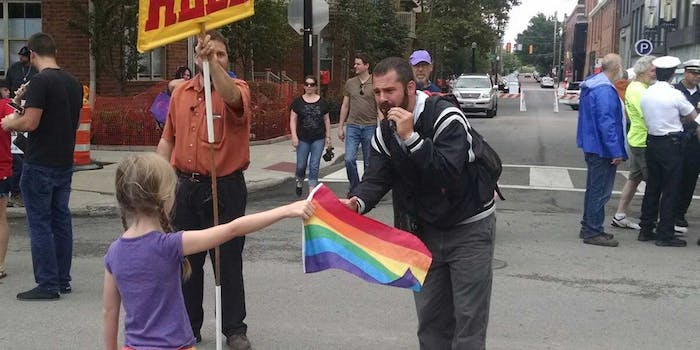 Columbus, Ohio’s annual music and arts festival, ComFest, happened to be taking place on Friday when the Supreme Court gave marriage rights to the nation’s LGBT citizens. The fest turned into an impromptu pride celebration, as Ohioans, including 7-year-old Zea Bowling, streamed outside to celebrate.

But not everyone in attendance was there to celebrate. One band of homophobic street preachers took the opportunity to rant about hellfire and brimstone in the midst of the party.

That’s when Bowling stepped in to save the day.

The first grader stood in front of the preacher and wielded her rainbow flag like a talisman against evil, standing tall, as seen in a video posted to YouTube by her dad, Ryan Bowling.

The preacher leaned down into the little girl’s face and yelled, “You could live a life that’s filled with his redeeming power, you’d have somebody to look after you, to love you and get you through your life, Jesus Christ would give you that, this world will not give you that.”

She stared bravely back into his face the entire time, holding the rainbow flag out in front of her. Soon, someone in the crowd ran up and gave Zea a high five. That started a flurry of high-fives and fist bumps, to which little Zea responded with aplomb.

Ryan Bowling also posted screengrabs to Facebook, where he explained what happened, with fatherly pride. 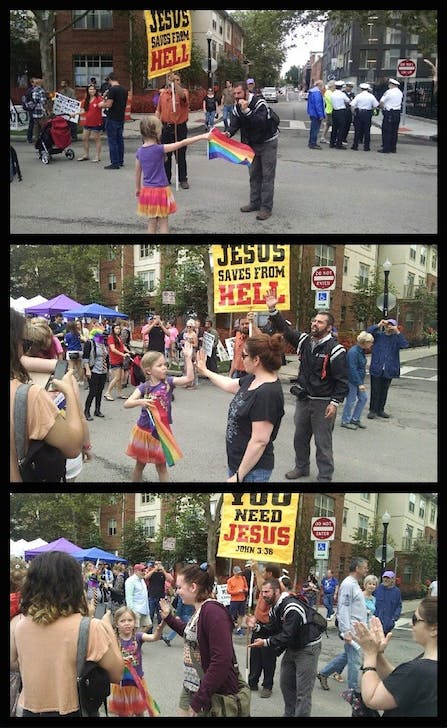 “Zea didn’t just flash the flag at that hatemonger, and bail. They went toe to toe, for several minutes, while he bellowed all of his fire and brimstone right in her face,” Bowling wrote in his post. “Grown man vs first grader. She told me afterward that she did feel scared. The one thing the people of #comfest2015 never let her feel though? Alone.”