We tried bacon-crust pizza and regretted it immediately

We may never eat pizza (or bacon) again.

Like any patriotic, red-blooded Americans at risk of early heart attacks, my wife Cecilia and I were pumped about news of a radical stunt product from the fast-food chain Little Caesars: a Detroit-style deep-dish pepperoni pizza wrapped in three and a half feet of bacon crust.

It's rare that things live up to the hype, the @littlecaesars Bacon Crust Pizza lives up to the hype!! #SnackSociety pic.twitter.com/pOlnwlpD51

Before moving to our current neighborhood, just a few blocks from a Little Caesars location, we’d both assumed the brand had long ago gone bankrupt. But here was a chance to give them their due. Our only problem? The restaurant at 125th Street and Morningside Drive was a day behind the promotion. “We’re starting that tomorrow,” they told us on the phone. 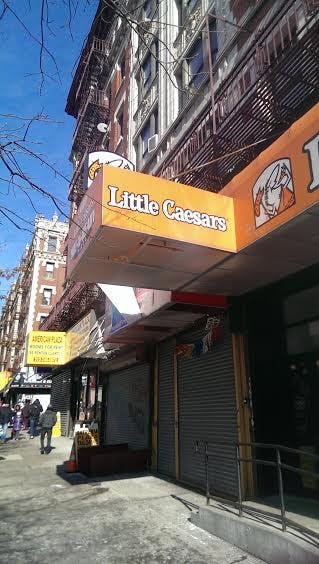 This meant hopping the train to 160th and Broadway, where an employee had assured us the bacon-encrusted monstrosity could be had this very afternoon. For some reason we imagined dining in was a possibility, only to discover that we’d have to transport the item—just $13.07 with tax!—35 blocks south in 22ºF cold with the protection of nothing more than cheap orange cardboard. It was us and a rectangle of oozing, meat-laden junk food. A total of 3,600 calories and 184 grams of fat. A race against the clock. You could definitely smell it in the subway car. The pizza in transit.

Somehow the mutant pizza was still lukewarm when we got back to the apartment. Here’s the transcript of what happened after we desperately cast off our winter wear and got to business.

She’s sleeping it off, and I’m sitting here tripping balls on sodium, wondering if I can get back to earth someday.

Cece: What’s with Caesar’s chest hair? I don’t want that in my pizza.

Cece: I love “Hot-n-Ready.” It’s totally the opposite of what a good restaurant would say: “made to order.” Like, “It’s been here all day, under a lamp, good to go.”

Cece: Hmm, it’s two smaller pizzas. So everyone gets a bacon corner piece? I like how mathematical the pepperoni placement is.

Cece: It looks like this pizza was made on a printer.

Miles: We can’t prove that it wasn’t. It seems to have a plastic grease trap under it. Otherwise it would definitely soak through. OK, let’s do this.

Miles: Yeah, I could see eating yourself to death on this.

Cece: It’s like the Pizza Hut thing: it’s not pizza, but it’s good? Pizza at a children’s birthday party at Fuddrucker’s—do you want the pizza or the hot dog, kid?

Miles: I didn’t realize there’d also be bacon bits sprinkled on top. There’s bacon on the pepperoni, it gets everywhere. The pizza looks… diseased?

Cece: Look at this pepperoni.

Miles: It’s sort of overcooked and dried-out on the edge. Just uneven cooking. Or warming. Uneven lamp coverage. What do we think of the bacon crust?

Miles: It’s not meat, anyway. It’s a crumbly salt stick. Totally flat. And structurally unsound. There’s nothing to hold onto.

Cece: The convenience of the pizza slice is completely erased. And it’s the bacon you would get at a bad diner at 3am. I don’t want to eat this corner because of it.

Miles: So the selling point is bringing it down. I don’t know that a tomato has been anywhere near this.

Cece: The sauce is kind of like that horrible pasta sauce we love. Cece: Dorm-room delicious. You know, terrible, but kind of delicious. I’m getting another slice. But I’m not eating that corner.

Miles: Me too. But I’m eating the bacon.

Cece: I’m trying to figure out what’s going on with the bread here.

Cece: I’m gonna keep eating it, get me some nap fuel.

This foodstuff had triggered some manner of neurochemical high even as it congealed into oily depth charges that detonated deep in the gut.

Cece ravaged another two slices while I tried without luck to find my pulse and hold my head upright. We agreed that this foodstuff had triggered some manner of neurochemical high even as it congealed into oily depth charges that detonated deep in the gut. Now she’s sleeping it off and I’m sitting here tripping my face off on sodium, wondering if I can get back to earth someday. Or maybe I’ll live the rest of my life in a state of pork-sweaty hypertension.

The good news is we know where the leftovers are going. A yearning for what one cannot name.