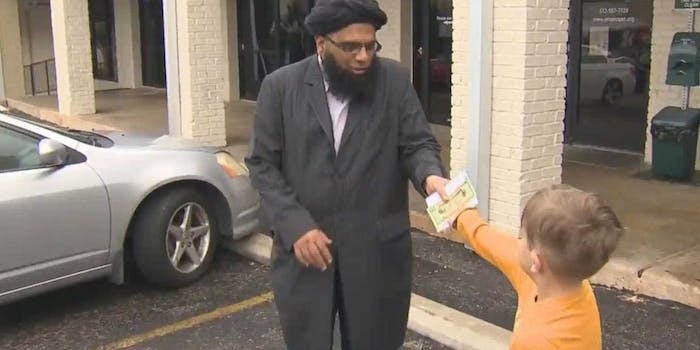 Jack was just doing a good deed. And it paid off in a big way.

The United States is still grappling with how to make Muslim-Americans feel safe right now. We might look towards a seven-year-old boy in Texas named Jack, who donated money he had been saving to a local mosque after it had been vandalized.

Jack lives in the area of Austin, Texas, where the nearby Islamic Center of Pflugerville was recently vandalized. According to local news station KXAN, worshippers at the mosque found “found feces splattered in front of the mosque with torn pages from the Quran” when they went to pray Monday morning.

“The fear factor is definitely there,” Faisal Naeem, an Islamic Center of Pflugerville board member, told KXAN earlier this week. “It’s an open space and the fear is somebody who is armed takes the next step and walks in, that’s a problem. We’ll work with law enforcement and take whatever legal measures that we’re allowed to take to protect ourselves.”

In response to the vandalism, Jack—who was saving up to buy his own iPad—decided to show some love. His mom, Laura Swanson, drove him over to the Islamic Center of Pflugerville and Jack handed over $20 that he had saved to put towards his prized tablet. Swanson told ABC News that she wanted to show that “what happened in Paris is not what’s happening in Pflugerville,” referring to backlash against Muslims following the Nov. 13 terrorist attacks in France.

“Jack’s $20 are worth $20 million to us because it’s the thought that counts,” Naeem said. “Jack is just a little older than my son, Ibrahim. If we have more kind-hearted kids like them in the world, I have hope for our future.”

Arsalan Iftikhar, who runs a blog called the Muslim Guy, was deeply touched by Jack’s gesture and sent him a surprise to say thank you: an iPad. His mom sent Iftikhar a photo of Jack with his new toy and a letter from Iftikhar on behalf of the American Muslim community.

The letter said the following:

Dear Jack,
You had saved $20 in your piggybank for an Apple iPad. But then a local Islamic mosque was vandalized. So you donated you $20 to this local Texas mosque. Because of your amazing generosity & kind heart, please enjoy this Applie iPad with our sincere thanks :)
Love,
The American Muslim Community :)

It is unclear who exactly sent the kind gift. But it is clear that Jack now has a karmic and physical return on his investment—and Muslims in his community received a strong message of support.

Correction: The iPad was sent by Arsalan Iftikhar.