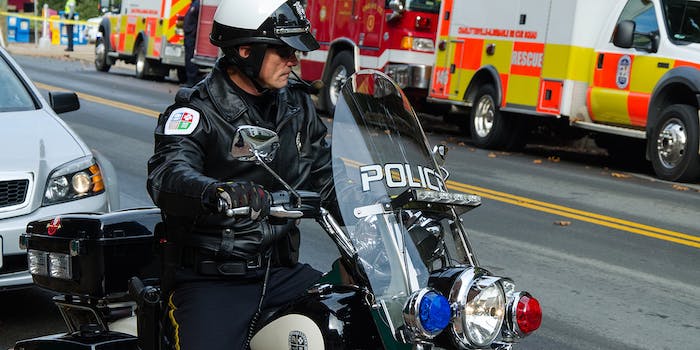 According to the ACLU, the scanners collect up to 3 million records each week.

In a decision on Thursday, a California judge upheld that local law enforcement agencies can keep secret records from a vast network of license plate scanners in the greater Los Angeles area.

Accumulated through a system of cameras mounted on stop lights and police cruisers, the movements of millions of vehicles in the U.S. are tracked and the information stored for law enforcement purposes. The rapidly expanding system, funded primarily by Homeland Security grants, is now in use by seven in 10 local agencies, according to a study by the Police Executive Research Forum.

Michael Robertson, a tech entrepreneur known for founding the website MP3.com, filed a personal lawsuit to acquire his own records stored in the secret database. A San Diego judge has ruled that local agencies can deny his request under California’s open records law, however, because the information pertains to police investigations.

“If I’m not being investigated for a crime, there shouldn’t be a secret police file on me” that details “where I go, where I shop, where I visit,” Robertson told the Associated Press. “That’s crazy, Nazi police-type stuff.”

Robertson’s case isn’t the only argument for access to be rejected by a California judge. A petition by the ACLU of Southern California and the Electronic Frontier Foundation, which sought a week’s worth of records on all vehicles collected by the police and sheriff departments in Los Angeles, was denied using the same reasoning: the records are essential to ongoing police investigations.

According to the ACLU, the scanners collect up to 3 million records each week and currently hold information on more than 455 million encounters. Naturally, this has alarmed privacy advocates who now seek added transparency through the courts in order to monitor for constitutional rights violations.

Law enforcement officials have tried to assure the public that not only is the system being used properly, but that it’s an efficient way to track criminals and exonerate innocent parties. Los Angeles County Sheriff Sgt. John Gawn told press: “At some point, you have to trust and believe that the agencies that you utilize for law enforcement are doing what’s right and what’s best for the community, and they’re not targeting your community.”

Whether or not these scanners violate the privacy of U.S. citizens—particularly those not suspected of any criminal activity—is part of a larger public debate over the tactics of modern police surveillance; a debate that has expanded greatly over the past year with the release of top secret documents obtained by National Security Agency (NSA) whistleblower Edward Snowden.

Leaps in technology over recent decades has increasingly made private information belonging to Americans more accessible to law enforcement. It’s also forcing U.S. courts to reevaluate how the Fourth Amendment, which is designed to protect against unreasonable searches and seizures, applies in the progressively digital 21st century.