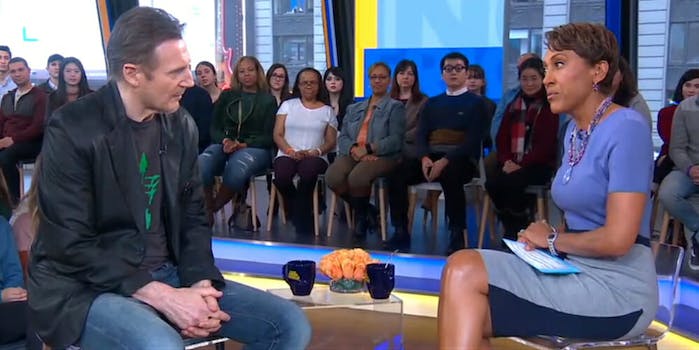 He described seeking out a random Black person to fight after a close friend was raped by a Black person.

On Monday, the Independent published an interview with Liam Neeson that included a shocking confession from the actor: He once attempted to find a random Black person to fight and kill, in response to a close friend being raped by a Black person.

In the context of the interview, Neeson began the story by explaining what causes someone to turn to revenge. He explained that years ago when he learned that a close friend had been raped, he wanted to do something. His friend didn’t know the identity of the rapist, but when Neeson asked for a description she said he was Black.

“I went up and down areas with a cosh, hoping I’d be approached by somebody—I’m ashamed to say that,” said Neeson in the interview. “I did it for maybe a week, hoping some ‘Black bastard’ would come out of a pub and have a go at me about something, you know? So that I could … kill him.”

In the interview Neeson expressed dismay at what he’d done, saying, “It was horrible, horrible, when I think back, that I did that.” Although Neeson clearly sees that it was wrong now, the admission still made people uncomfortable, confused, and angry.

That Liam Neeson interview is just so saddening (and yes, still racist). It reinforces the idea that people of colour, and especially black men, are collectively responsible for the misdeeds of one. And that when a woman is sexually violated, it's a man who is left truly wounded.

Interviewer: So Liam, you have a movie coming out correct?

Liam Neeson: I once wanted to murder a random black man for a week because I was upset at another black person.

Could Will Smith confess to stalking the streets of Los Angeles for a whole week searching for random white people to kill and get a pass? Exactly… #LiamNeeson

Liam Neeson: i considered carrying out a racist murder years ago

Neeson went on Good Morning America today to clarify his story, and was met with a serious conversation from anchor Robin Roberts about racism today, and where his story fits in. Neeson explained to Roberts that he realized what he was doing was wrong and sought help, saying, “I’m not racist. That was 40 years ago.”

When Roberts asked Neeson what the teachable moment was here, he said, “To talk about these things,” said Neeson. “In this country, it’s the same in my own country too, you sometimes just scratch the surface and you discover this racism and this bigotry.” When he turned the question back to Roberts she went deeper.

“[The lesson is] having to acknowledge the hurt, even though it happened decades ago, the hurt of an innocent Black man knowing that he could have been killed for something he did not do because of the color of their skin,” Roberts said. “You’re not shying away, you’re admitting it was wrong. You’ve learned from that … but you have to also understand the pain of a Black person hearing what you said.”

Roberts’ words ring especially true today, on what would have been Trayvon Martin’s 24th birthday, had the unarmed Black teen not been shot and killed by George Zimmerman in 2012.

What Liam Neeson described is how boys like Trayvon Martin end up dead. When a black person is carrying the weight of all black sins and assumed as guilty & are walking targets for justice seeking vigilante white people. Are we meant to praise him cos he didn’t find a victim?

The fact that Liam Neeson is out on the talk show circuit today explaining away as “not racist” his history of stalking the streets with a club wanting to kill any “black bastard” he could find, and that today is also Trayvon Martin’s 24th birthday, should not be lost on anyone.

Some people also made a connection to the recent attack on Empire star Jussie Smollett, reportedly targeted in a recent Chicago hate crime.

Twitter: "Jussie Smollett's story is suspect. Who just walks around trying to beat up a random Black dude."

Liam Neeson: “I went up and down areas hoping some ‘black bastard’ would come out of a pub and have a go at me about something, so I can kill him."

I don't wanna hear none of y'all defending him either because y'all just was up in arms about that Jussie Smollett story and Liam Neeson sounds like he was that exact kind of person that would go around waiting to commit random crimes against black people.

Although some people want to commend Neeson for his honesty, others see this as further normalizing random acts of violence toward Black people. On Twitter at least, many users aren’t ready to accept his candid apology.