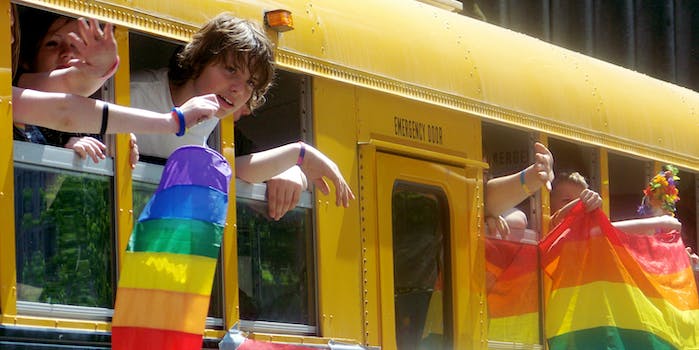 The results of a new, anonymous survey are staggering.

According to the Stopping School Pushout study published by the National Women’s Law Center (NWLC), 38 percent of LGBTQ teen girls ages 14-18 have experienced sexual assault, 15 percent have been physically forced into sexual intercourse, and 52 percent ohave experienced “sexual or other violence.” By comparison, one in five straight teenage girls report some form of sexual assault.

LGBTQ teenage girls were also more likely to report being harassed after the U.S. presidential election and report absences from school “because they felt unsafe there or on their way there.” 21 percent reported facing harassment because they are girls, 27 percent reported experiencing domestic violence from a family member, and 36 percent felt like “other students did not want them in their school.” Many girls experienced partner violence, too, with 16 percent saying they were physically hurt by someone they were dating.

The NWLC’s reports come from a national survey conducted in January that captures the experiences of 1,003 anonymous teenage girls. According to an online report on the findings, one in four girls identified “somewhere on the LGBTQ scale.”

Aside from the problems and experiences of LGBTQ girls, the study also included solutions female LGBTQ students would like to see their schools address. 90 percent wanted the school system to train faculty and staff on recognizing “signs of trauma or mental illness,” and 84 percent also wanted protection from harassment and for their school to “deal with it immediately if it occurs.”

“The data should send an urgent message to educators that it’s time to address the significant hurdles that LGBTQ girls face every day at school,” NWLC Director of Education Neena Chaudhry said. “The trauma that girls experience affects not only their mental and physical health but also their ability to concentrate, feel safe, and stay and do well in school.”

The LGBTQ report is one in a series from the NWLC looking at the experiences of various marginalized groups, including women with disabilities and women of color. In the Stopping School Pushout report, the NWLC found that girls of color were more likely to attend school systems that were under-resourced for their needs and experiences. The study, also conducted post-election, found that 55 percent of Latina girls and 30 percent of black girls also deal with the day-to-day worry that someone close to them—such as a family member or friend—will be deported by the government.