Despite growing acceptance, being LGBTQ is still an obstacle to those running for office.

While public attitudes toward the LGBTQ community have become increasingly favorable in the past 10 years, new Pew Research finds that LGBTQ people may still face significant challenges because of their gender identity or sexual orientation if they were to run for president.

People who say that a candidate’s sexual orientation would have an impact on their vote overwhelmingly cite that impact as negative and view being LGBTQ as a disadvantage. Other disadvantages viewed more favorably than being LGBTQ include “has used marijuana,” “is Mormon,” and “has Washington experience.” However, if a candidate is Muslim, doesn’t believe in God, or has had past financial troubles, Americans are even less likely to support those candidates than LGBTQ ones. 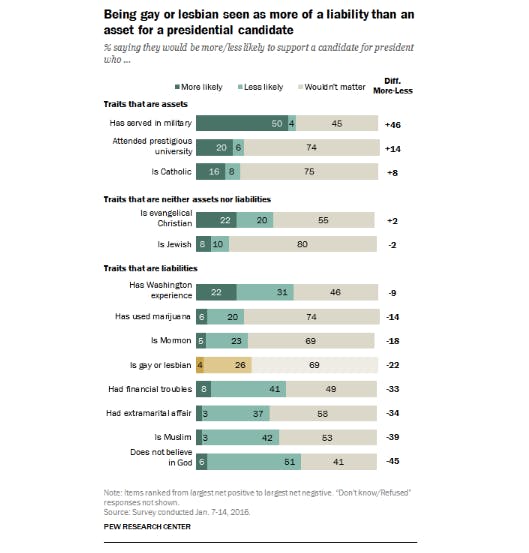 The good news is this data only reflects a small portion of Americans— those who say sexual orientation or gender identity would impact their decision. The majority of Americans (69 percent) say that a candidate’s sexuality wouldn’t alter their support for the candidate at all and only four percent of adults say it would make them more likely to vote for that candidate.

Overall, the number of LGBTQ elected officials has grown over the past decade. This Election Day alone, Oregon Democrat Kate Brown, a bisexual woman, was the first LGBTQ person elected to be governor, son of Korean immigrants Samuel Park became the first openly gay man elected to the Georgia legislature, and two transgender candidates, Misty Snow and Misty Plowright, ran for congress in Utah and Colorado, respectively.