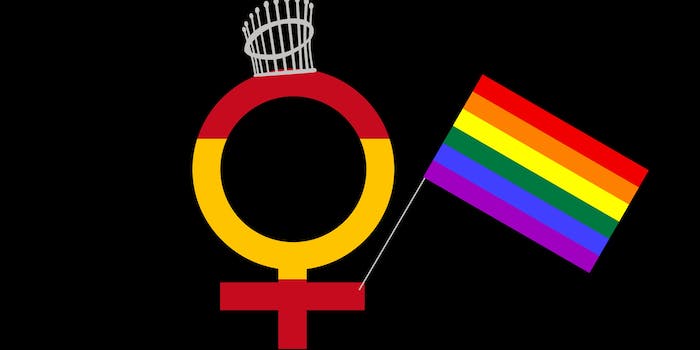 Patricia Yurena (and her girlfriend, Vanesa Cortes) made history.

Miss Spain Patricia Yurena made history as the first openly LGBT national pageant queen after Instagramming a picture with her girlfriend last week.

Yurena came out casually via the app, posting a photo with her girlfriend, Vanesa Cortes, a singer and DJ on the Spanish House circuit. Yurena captioned “Romeo and Juliet” and included the hear-no-evil, see-no-evil, speak-no-evil monkey emojis.

She followed up with more pictures of Cortes and a message of thanks to her fans.

“I published quite naturally and impulsively. I appreciate the outpouring of support,” she shared on Instagram and Twitter in her native Spanish.

Yurena is the first out LGBT national pageant queen. She won her crown first in 2008 and again in 2013. Since the company that manages the pagents in Spain filed for bankruptcy in 2013 she may be the last reigning pagent queen from the country, according to the New York Daily News. She competed in the 2013 Miss Universe pagent in Moscow, which came under criticism for Russia’s stance on LGBT people. She was a runner up in the competition.