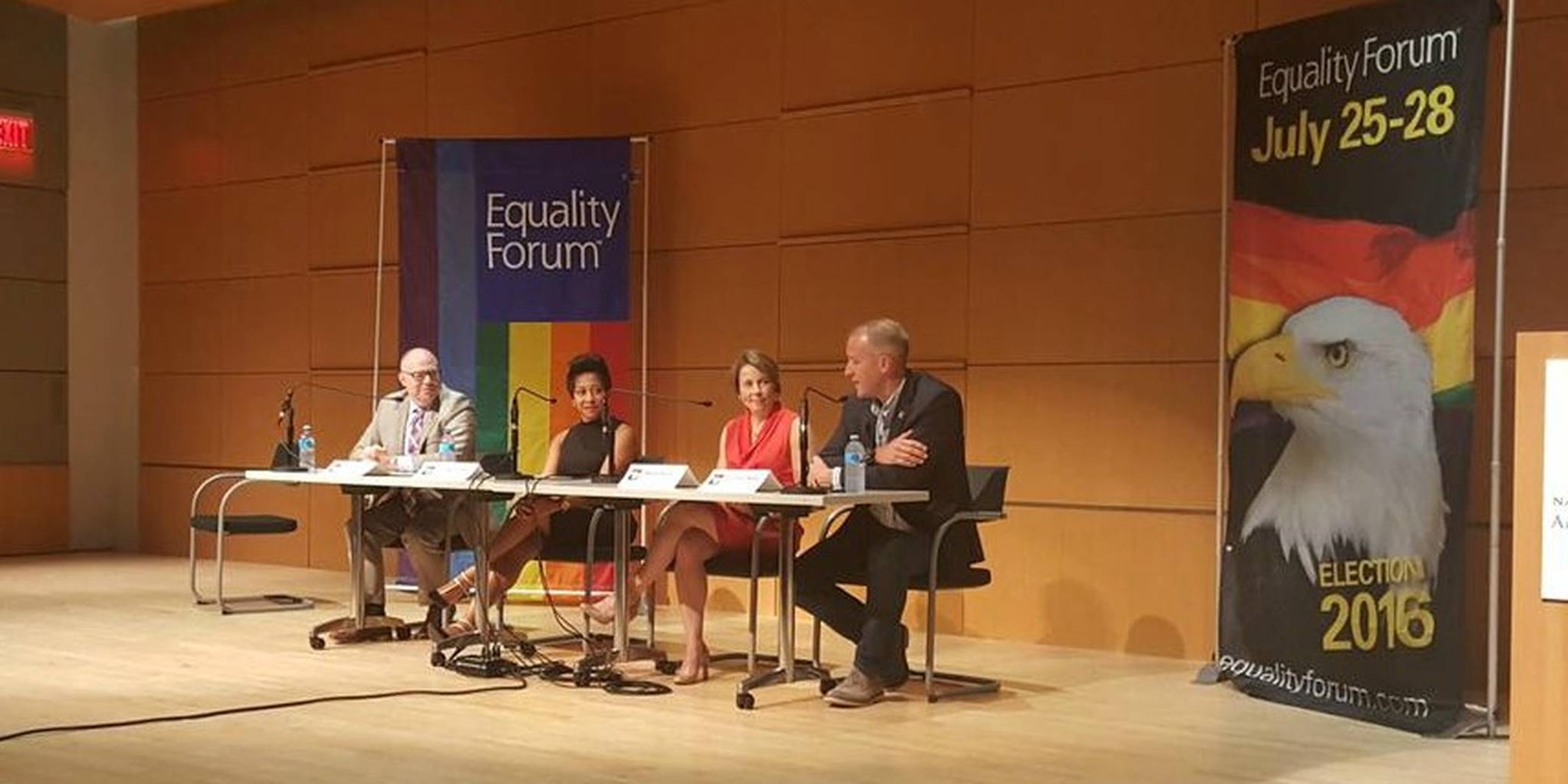 Talking Rentboy, Orlando, and trans rights at the DNC.

If you don’t have a seat at the table, bring a folding chair.

It’s a famous saying in politics, and one repeated over and over by LGBT delegates, advocates, and elected officials at the 2016 Democratic National Convention—reflecting a long-held sentiment of outsiderness that is dramatically changing at this year’s convention.

With more than 500 LGBT delegates, the 2016 DNC is the “queerest” in history. But it’s not just about making up 11.5 percent of the party’s delegation this year; in record numbers, LGBT elected officials and candidates are also in attendance. Even a decade ago, such strength in numbers would have been unthinkable. But this year, the DNC is paired with the Equality Forum—the annual LGBT civil rights event that brings elected officials together with iconic figures and celebrities for a targeted review of the movement’s future.

At the National Museum of American Jewish History on Wednesday, one of the week’s Equality Forum events plucked some of the brightest stars in politics for a panel discussion about the unique challenges of being what moderator Aisha Moodie-Mills (President of the Victory Fund, the nation’s largest LGBT PAC) called “being the first and the only.”

Among the “first and only” lesbian and gay elected officials on the panel were Massachusetts Attorney General Maura Healey, Congressman Sean Patrick Maloney (D-N.Y.), and Florida State Representative David Richardson.

Healey, the first openly LGBT state attorney general in the U.S., called attention to the slow progress that paved the way for her career—and for the relative lack of fanfare around the election of a lesbian to the state’s top legal position.

“The sky hasn’t fallen since the Massachusetts Supreme Court legalized same-sex marriage in 2003, and I’m a beneficiary of that,” said Healey, noting that the press barely mentioned her sexual orientation during her campaign.

Richardson echoed a similar nonchalance, though he is currently Florida’s only out gay legislator. He said that while his gayness is a frequently addressed subject in the state legislature, it hasn’t precluded his oddly warm relationships with Republicans. When he filed an amendment in 2015 to strip a ban on gay adoption from the state’s books, the support flowed in from surprising seats across the aisle.

“It was interesting to see some of the really far-right Republicans who would have normally voted against it,” said Richardson, “but came to me and said, ‘I’m voting for this because I know you and I support you, and I’m sleeping just fine at night.'”

It was a direct link between each of the out politicians on the stage: by their simple presence in the room, they had managed to open minds and find increasing support for LGBT rights among otherwise conservative colleagues.

Richardson also exposed the flipside of being the only gay person in the room; after the Pulse shooting in Orlando, he said, he had to draw boundaries with Florida Gov. Rick Scott and say no to press and photo ops—in order to not be “used to facilitate him after he has not been responsive to our community.”

The risk of being tokenized, as Richardson explained, is offset by the opportunity to seize those “gay photo op” moments and redirect them toward legitimate policy changes—something that Richardson said he has tried to do for Florida’s LGBT community in the wake of Orlando.

“It’s important that there are good people in government,” stressed Healey, who described some of the careful coalition-building her team had engaged in to pass a landmark transgender anti-discrimination bill this July.

It’s not just important to have LGBT people sit at the table, but for New York Rep. Sean Patrick Maloney, it’s just as important to be out and proud.

“I didn’t run as the gay guy, but I’m not running away from it either,” Maloney said, noting his conservative district includes the West Point Military Academy (where he also co-chairs the board). “And I’m sick of acting like there’s something less-than about our lives and our communities.”

Maloney, elected in 2012, isn’t just distinguished by being the first openly gay congressman from New York. In recent years, Maloney has pivoted toward a fearless support of LGBT community issues that other politicians almost never touch.

In March, Maloney was the sole member of Congress to even address the massive 2015 federal raid of the gay hookup site and male sex worker community Rentboy.com. In a letter to Homeland Security and the Justice Department about Rentboy, Maloney had asked what “role that anti-LGBT attitudes and biases may have played in your pursuit of this matter.”

The Daily Dot asked Maloney about his decision to speak out about the sudden and somewhat bizarre federal crackdown on Rentboy at a time when no other elected official talked about it.

“It was one of those texts you send to your staff late at night and then all hell breaks loose,” joked Maloney in response. But then he got serious.

“The language in the indictment made a big deal out of the salacious nature of the postings,” Maloney told the Daily Dot, “As if there was something pernicious or pejorative out of the way gay men have sex and interact with each other.”

Maloney also said that his office never received a response from either agency and that he was reminded that it’s time to follow up on the issue.

The Rentboy raids were a particularly shocking use of massive federal and law enforcement resources to crack down on gay sex, just weeks after the Supreme Court made marriage equality the law of the nation. But as Mills and the three elected officials noted on Wednesday, there’s always another battle around the corner that requires an LGBT presence in the room.

At the top of the agenda for LGBT representatives in politics: ensuring that so-called “religious freedom” bills that use coded language to legalize discrimination are trampled, and fighting for the passage of the federal Equality Act that would protect LGBT Americans.

“This election is absolutely emblematic of where we are at,” Healey said in what seemed like a reference to the Republican party’s notably anti-LGBT platform. “We have a stark and clear choice here, not just for the next four years but fundamentally for the direction of this country.”