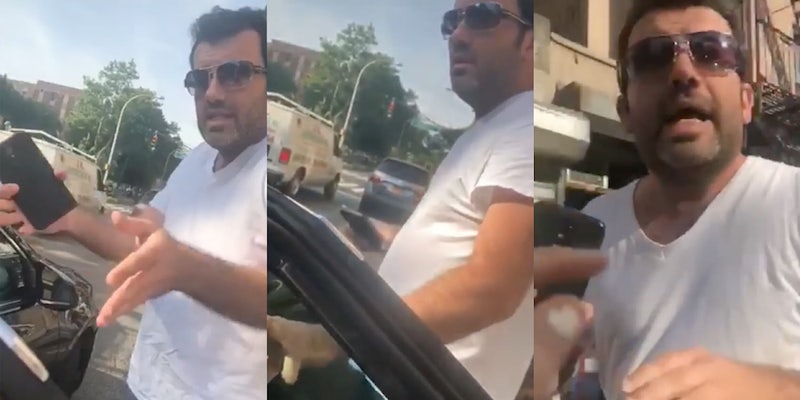 The ride-hailing company issued an apology.

Two women say an Uber driver kicked them out of his car after they shared a quick kiss in the backseat, the New York Daily News reported on Monday.

Alex Iovine, 26, and her girlfriend Emma Pichl, 24, say they were headed from one birthday party to another in New York City when they requested the ride-hailing service.

“We were sitting on opposite sides of the car,” Iovine, an advertising consultant, told the Daily News. “We leaned in for a peck, and that’s what it was, a legit peck.”

But then the driver pulled over and told them to “get out,” according to Iovine.

“My girlfriend started laughing,” she said. “She thought he was joking.”

The couple, who say they had been drinking but weren’t drunk, recorded a cellphone video showing the driver, 35-year-old Ahmed Elbotari, booting them from his car.

“It’s illegal,” the driver says in the video. “You can’t do this in the car. You aren’t allowed to do this.”

When Iovine presses him to explain why they’re being ousted, Elbotari says “it’s disrespectful.”

He told the Daily News that he “didn’t feel comfortable” with the women, who he added were playing loud videos on their phones and exhibiting other behavior he found inappropriate.

Following reports of the incident, Uber refunded the women their $22 fare and issued an apology.

“Uber does not tolerate any form of discrimination, and we have reached out to the rider regarding her experience,” Uber spokeswoman Susan Hendrick told the Daily News. “We are investigating and will take appropriate action.”