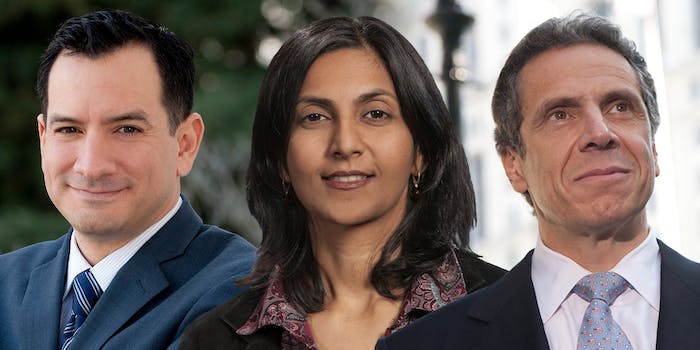 Officials are denouncing Trump's harmful policy promises and claiming their states and cities as safe havens.

Lawmakers and elected officials all over the country are taking a stand against Trump and reassuring the people of their state and this nation that they will not stand for Trump’s administration’s harmful rhetoric and policies. If you belong to a community Trump, his followers, or members of his cabinet have attacked, legislators and politicians in these states have made it clear: They’ve got your back.

The California Senate President pro Tempore Kevin de León (D-Los Angeles) and California Assembly Speaker Anthony Rendon (D-Paramount) released a joint statement following the election results in English and Spanish, vowing that the “largest state of the union and the strongest driver of our nation’s economy” will be a refuge for people from all walks of life. The letter ended with an impactful statement: “While Donald Trump may have won the presidency, he hasn’t changed our values. America is greater than any one man or party. We will not be dragged back into the past. We will lead the resistance to any effort that would shred our social fabric or our Constitution.”

In a letter on his website, Boston Mayor Marty Walsh wrote: “Trump said things in his campaign that alienated and even threatened people I care about, including women, immigrants, gay, lesbian, and trans people, people of color, people with disabilities and Muslims” and reassured the readers and members of these communities that Boston will not compromise its values and Bostonians will stand with anyone who is harassed or threatened.

#Boston is a city of inclusion, a city of compassion, a welcoming, diverse, global city. We’ll stay that way. https://t.co/T1UktRKNXi

In New York, both Democratic Sen. Chuck Schumer and Gov. Andrew Cuomo have denounced Trump and assured New Yorkers and Americans that their rights will always be protected in the state of New York. Cuomo’s letter ends with a powerful and firm line: “We are New York, and we will stand up for you. And on that, I will never compromise.”

My open letter to the people of the State of New York following Tuesday's election: https://t.co/9nIfk3gwrE

Seattle Councilwoman and socialist Kshama Sawant called for a “nationwide shutdown” on inauguration day and encouraged Seattleites to join her in an anti-Trump protest in downtown the day after the election to “tell America we do not accept a racist agenda.”

.@realDonaldTrump's election has devastated millions. Rally w/ me TODAY at Westlake 4 pm to discuss how we fightback https://t.co/1gXQyIsg6u

Portland’s Mayor-elect Ted Wheeler responded to Trump’s election by issuing a statement saying Portland’s status as a sanctuary city was not up for debate. Oregon also elected Kate Brown, an openly bisexual woman, as governor.

We will always see ourselves as a sanctuary city. https://t.co/vwr2yl7O9T