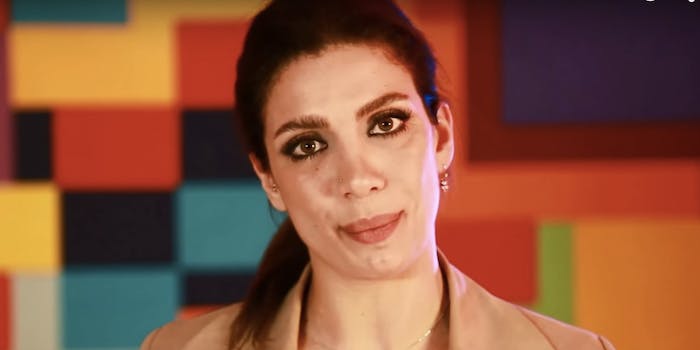 Middle Eastern celebrities came together to celebrate gay rights in this inspiring video.

In the Middle East, any “deviation” from heterosexual sex is condemned by a conservative populace influenced by very restrictive religious leaders. In fact, if you’re gay, you run the risk of imprisonment or even death.

Within the region, Lebanon has always been a bit of an anomaly in terms of gay rights. Now, celebrities from the region are stressing the country’s liberal politics in a new video.

To commemorate International Day Against Homophobia, Transphobia, and Biphobia (IDAHO) on May 17, the civil society group Proud Lebanon has released a gutsy and lovely video celebrating brotherhood and sisterhood between the country’s LGBT and straight citizens. IDAHO commemorates the date in 1990 when the World Health Organization removed homosexuality from its list of diseases.

Global Voices translated the video, in which prominent Lebanese like director Zeina Daccache and TV host Fouad Yammine calls for Lebanon “to respect the Universal Declaration of Human Rights and to not discriminate against ‘those who are different.’”

“Did you know that the first article of the Universal Declaration of Human Rights states that all human beings are born free and equal in dignity and rights? Did you know that in the 21st century, there are still people being beaten, stigmatized, arrested and in some cases even killed… just because they are LGBT?” the video asks:

“Being different isn’t shameful… what’s shameful is fighting diversity. He could be your brother, your neighbor or your co-worker. She could be your sister, your friend, or even your boss at school. If you don’t recognize their existence, it doesn’t mean that they don’t exist. Protesting this injustice isn’t enough. We should all work together to change these unjust laws and replace them with laws that protect all citizens. Because laws are for protection, not discrimination. We were all born free and equal. I know that it’s hard to face society, but at least the laws need to be just.

Although Lebanon is less restrictive than many countries in the region, the legal status of homosexuality is still unclear. Several judges have rendered decisions that cast doubt on the legality of Lebanese legal code Article 534, which bars “unnatural” sexual act. One decision in January 2014 called 534 invalid, as it “did not provide a clear interpretation of what was considered unnatural.”

“The situation of the LGBTs in the area in general became worse with the increasing violence and impact of Islamic radicalism, as ISIS and others,” Bertho Makso, director of Proud Lebanon, told the Daily Dot.

“While in Syria and Iraq LGBTs and mostly gay men are being killed in the name of religion, we in Proud Lebanon urge the big powerful countries to work on providing protection to all marginalized groups including LGBTs, because they are the ones paying hard the price of the wars in our region.”

Esra’a Al Shafei, the director of Mideast Youth, whose sites include Ahwaa, a safe harbor for Arab youth who want to talk about sexual issues, told the Daily Dot that every little bit helps.

From what she’s seen on Ahwaa, “a lot of young people are still struggling to come to terms with their identity, particularly elsewhere in the Arab world. It has changed for the better in the sense that they now have tools and forums to discuss these issues and to meet people in similar situations, but socially and politically there is still a lot of work to be done for LGBT rights to move beyond the taboo phase.”

“Any gesture of this kind is a positive one because it helps increase awareness throughout the region,” Al Shafei added. “Every step in the right direction means something, no matter the size of the effort or the immediate influence. Over time it counts for something meaningful. “