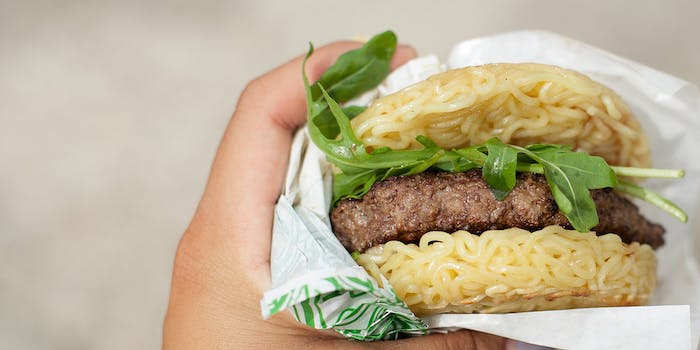 Learn how to make your own Ramen Burger

Fresh on the heels of the cronut, a new designer food fad is poised to change our eating habits forever—or at least the next couple weeks. The Ramen Burger, an innovation engineered by Keizo Shimamoto to great acclaim at Smorgasburg, a gustatory flea market in Brooklyn, is now something you can make at home, according to a video recipe from Popsugar.

Too bad it’s so much work.

First things first: no, the ramen does not itself constitute the “burger” in the equation. Instead, it forms the bun for a regularly spiced beef slab. How is this sorcery performed? Well, you cook the noodles (any regular cheapo packet of the stuff should do), stir them up in some whisked egg, compress them into the proper shape, let them sit in a refrigerator for 15 minutes, and finally tease them out of their containers to be fried up in oil.

Leaving alone the dubious proposition of cooking ramen noodles and not consuming them instantly, as though your very being depended on it, the result actually looks pretty tasty. (The additional fried egg, sriracha, cheese, arugula and scallions don’t hurt.) Still, who has the patience for any of it? And when a TV chef says something is “really tricky,” as transferring the cold, egg-soaked ramen discs to the frying pan apparently is, that’s just code for “you will never, ever get this part right, sorry!”

I suppose when you’re faced with the choice of getting on a two-hour line at 8am on a weekend and just making the damn thing yourself, you may want to turn to this ramen burger technique. Even if it is a perversion of a sacred snack food that is far easier to prepare.

It’s also worth noting that whatever success you have in this attempt at a culinary mashup, you won’t be as happy as this guy.