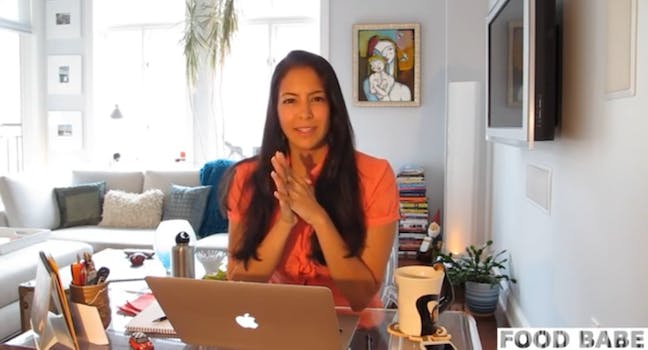 But Vani Hari, the creator of the popular Food Babe website, has made a name for herself in part by advocating against deceptive food packaging. Earlier this week, she blogged about a call to Lean Cuisine headquarters where she learned that the “100% natural” claim was reportedly bogus.. Alongside organic ingredients, the company was allegedly using genetically modified organisms (GMOs): corn, canola, soy, and beets, as well as the tell-tale “natural flavor” and manufactured sugar.

“When possible, we do source our ingredients domestically,” where the vast majority of crops are now genetically modified, admitted the Lean Cuisine customer support. Then the operator linked Hari to a website, FactsAboutGMOs.org, sponsored by the food industry lobby and corporations like GMO giant Monsanto.

Hari put the recording of her conversation with Lean Cuisine headquarters on YouTube:

As her post took off, angry customers took to Facebook, flooding Lean Cuisine’s comments section with demands for accountability and an end to the increasingly criticized practice of packaging GMOs as “natural.”

“GMOs is not natural and definitely not healthy,” commented Facebook user Theresa Hadden-Martinez. “Come on, can’t you use real food?”

The outcry was so sustained that a day after Hari’s blog post, the company made a Facebook post of its own to explain that its advertising campaign came to consumers courtesy of the Food and Drug Administration:

We’ve heard your concerns about how Honestly Good can say “100% all natural” when they are likely to contain GM ingredients. To U.S. food regulatory agencies, GM ingredients are no different than conventional ingredients. These agencies have policies about what foods can call themselves “natural”— they do not contain any artificial ingredients and are only minimally processed. We meet these policies and this is why we are permitted to label Lean Cuisine Honestly Good as “100% Natural.”

Inevitably, Lean Cuisine’s response met with even more criticism. The current top comment, from Christy Arneson, is a dry one: “Perhaps you should go above and beyond US regulatory standards.”

Meanwhile, a fledgling class-action lawsuit and petition against several major food corporations is attempting to draw attention to the false advertising used in the food industry’s attempts to foist GMOs onto the public. But as long as the government supports the industry and many consumers struggle to afford pricier organic brands, it seems unlikely that even several thousand Facebook users will change the market.