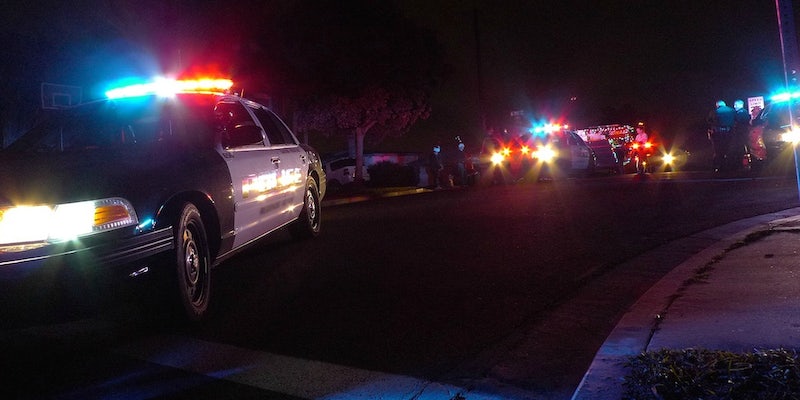 The evidence is viewed differently by police and deceased's family.

The family of a mentally ill man shot to death by a Florida police officer released on Wednesday an edited, slow-motion version of the video taken from a patrol car’s dashcam.

The video does not show Lavall Hall, 25, at the moment of his death, but Miami Gardens, Fla., police officer Eddo Trimino, who fired the fatal shots, is seen walking backward in front of his cruiser while firing four gunshots at a slightly downward angle. Tremino is then seen moving forward, while apparently looking toward the ground and firing a fifth shot.

The Hall family and their attorney believe the video is evidence that the officer used excessive force. The mother of his 8-year old daughter, Melissa Edwards, told the Miami Herald: “They killed him, murdered him.”

The police department sees things differently. The video, police union representatives say, vindicates Trimino. He was backing up, as if retreating, which is evidence that he feared for his life, according to his attorneys. They also contend that the downward trajectory of the gunfire, which the family views as evidence that Hall was on the ground, is consistent with police training.

“You’re trained to shoot at the center body mass. So it’s going to be a bit of a lower trajectory of the gun,” Trimino’s attorney told the Herald.

Trimino was called to deal with Hall in the early hours of Feb. 15 after his mother, Catherine Daniels, discovered him outside in the cold partially naked and waving a broomstick. A week earlier, police had escorted Hall, a schizophrenic, to a nearby mental hospital. This time, he was violent, striking both Trimino and another police officer, who later required stitches.

A 19-minute version of the video begins at nearly 5am ET. Daniels is heard telling the officers: “I’m scared. Please don’t hurt my baby.”

Trimino then fires four shots while backpedaling. There’s a brief pause as he moves forward, and then a final shot rings out.

Indicting a police officer for a shooting death in Florida is extremely rare. The last time it happened was in 1989 when prosecutors charged Miami police officer William Lozano after he fired at a man fleeing on a motorcycle, killing two people. Lozano was convicted of manslaughter in Miami, a decision later overturned by the appellate court. A second jury acquitted him.

Officers in Florida are afforded wide leeway to use deadly force — including being able to fire at fleeing suspects under the state’s “fleeing felon” law. That statute was cited in March when the state chose not to charge any officers for the 2011 Memorial Day shooting death of Raymond Herrise, who was shot 16 times inside his car, and whose car was struck with more than 100 bullets.

The dashcam video was released this week by Miami Gardens at the request of the family. The state attorney’s office reportedly argued that its release would “undermine the integrity of the investigation.” Miami Gardens Mayor Oliver Gilbert said he was compelled under state law to release the video.

Photo via dogulove/Flickr (CC BY 2.0)