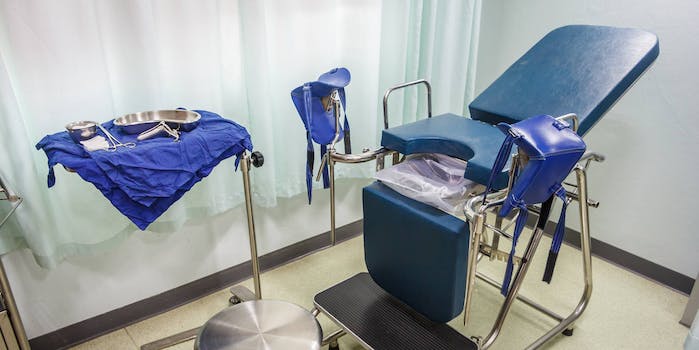 Women speak up about their late-term abortions

First off, they're not a C-section, like Trump implied.

In the aftermath of Donald Trump’s comments on late-term abortions being akin to ripping a fetus from the womb at nine months, women who’ve had actual late-term abortions are speaking out about their experiences—and saying Trump’s views are dangerous for anyone seeking this type of medical treatment.

(why am i still here?) every person i know who has had a late term abortion did it for heartbreaking life and death reasons.

So according 2 Donald Trump I had a late term abortion 12 yrs ago. Magically that aborted baby is now a cello playing 7th grader. #idiot

On Facebook, Alyson Draper described her late-term abortion, which was illegal in her home state of Utah. “I had one dead twin. The other had severe Spina Bifida, and would only have lived with life support, in great pain, for a few days,” she wrote. Though her husband and her LDS bishop both agreed an abortion was necessary, she had to wait until the health care corporation’s ethics commission approved it.

The organization 1 in 3, named for the number of women who have had abortions in their lifetimes, has been collecting stories of abortions. In one, Lindsay Bubar describes having an abortion at 22 weeks, after discovering the fetus had a brain tumor, and if she had carried it to term, he would have had a 50 percent chance of survival with surgery. “Even if Evan survived the surgery,” she wrote, “the best case scenario was that he would be technically alive, but would have no brain function and couldn’t ever hope to see, hear, talk or smile.”

“Trump’s comments last night were horrific,” Bubar told the Daily Dot over email. “He was not only espousing hateful and uninformed rhetoric that demonstrated that he had no idea what an abortion actually is (he repeatedly described a C-section delivery and called it a late-term abortion), but even worse, he exhibited absolutely no desire to understand the often deeply personal, difficult, and complex scenarios women and families are in when making the decision to have a late-term abortion.”

Bubar said she felt personally hurt by Trump’s comments, and by the representation of late-term abortion as a hasty decision or a sudden change of mind made without deep consideration. “The gravity of making that choice—of deciding that an abortion is the best option for your family and baby when it was a planned pregnancy you very much wanted—is the most difficult experience many people have to go through,” said Bubar.

Many are also sharing an interview Jezebel did back in June with a woman who had an abortion at 32 weeks. That same author, Jia Tolentino, also interviewed one of the few doctors trained in giving third-trimester abortions in 2013 for the Hairpin. In it, Dr. Susan Robinson explains that many women either don’t know they’re pregnant until the third trimester, discover there is a fetal anomaly, or that giving birth would be a huge risk to their health. “I really hope that they’ll understand that these late abortion decisions are carefully made by these women,” she said of people seeing the documentary about her work. “They have been thought out, wrestled with, agonized over. They are never casual. And the need for late-term abortions will never go away.”

What Trump and other anti-abortion politicians seem to miss is nobody has surgery unless they can help it, and when women have abortions they are not trying to harm a fetus, but instead care for themselves and their families.

“I wish more people saw it from that perspective,” said Bubar, “so they would have a deeper understanding of how laws limiting our options in those most personal, often challenging moments would impact women and families.”