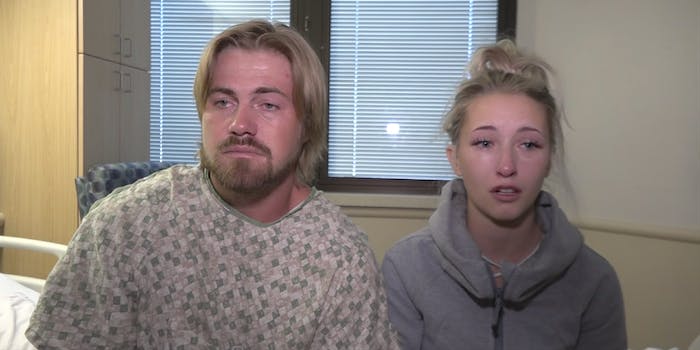 They're being called 'actors' and receiving death threats.

Less than a month after a lone gunman in Las Vegas killed 58 and left over 500 injured, survivors are facing online harassment by conspiracy theorists who think they’re actors who faked the massacre.

Canadian Braden Matejka attended the Route 91 Harvest music festival with his girlfriend, Amanda Homulos, as a birthday gift for turning 30. But when the gunfire started and the couple started running, Braden was shot, plummeting to the ground and bleeding from his head. As it turned out, the bullet just missed Matejka’s brain.

But despite his stay at a hospital and an interview with the Associated Press, online conspiracy theorists began questioning the shooting, suggesting that victims faked their injuries as part of a government conspiracy. After Matejka’s brother Taylor and other family members helped share a GoFundMe fundraising campaign to support Braden while he healed, people began harassing Matejka and his family online.

“Obviously a TERRIBLE CRISIS ACTOR,” a Facebook user going by Samantha said, the Guardian reports. “HE’S SCAMMING THE PUBLIC… This was a government set up.”

“You’ll pay on the other side,” another Facebook user named Mach told Matejka.

In one case, a poster sent Matejka a death threat, hoping that someone shoots and kills him.

“You are a lying piece of shit and I hope someone truly shoots you in the head,” one user wrote to him on Facebook. A meme going around on Facebook shows Matejka after sustaining his injuries with the words “I’m a lying cunt!” plastered on the bottom.

Another Las Vegas shooting survivor who received wide media coverage was also targeted online by conspiracy theorists. After accepting interviews from major news networks like NBC and ABC, YouTubers targeted survivor Mike Cronk, suggesting he is a crisis actor. Another man, Rob McIntosh, was also harassed after he was shot in both the arm and chest.

“It makes you angry,” McIntosh told the Guardian about the harassment. “You’ve already been through something that’s traumatic and terrible, and you have someone who is attacking your honesty.”