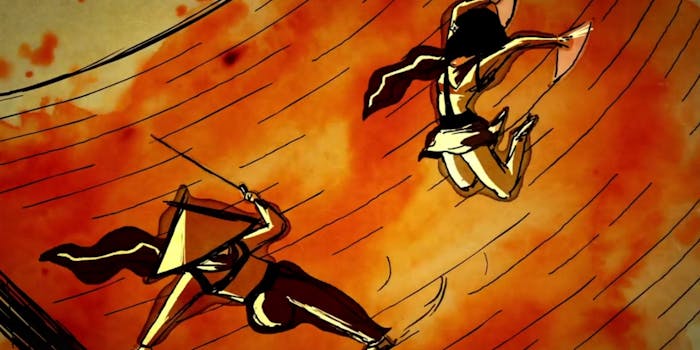 Watch a breakup elegantly animated as a kung fu battle

Splitting up is never easy. Jonathan Ng's gorgeous short film portrays the end of a relationship as a kung fu duel.

Breakups are never easy, especially ones in which the two parties lob sharp attacks at each other with the intention of inflicting emotional pain. This largely serves as motif for “Requiem for Romance,” a beautiful and poignant animated short film by Jonathan Ng that portrays the end of a relationship as a kung fu duel.

Through the course of a telephonic exchange between Yun and Tsai, the short walks us through the five stages of grief and loss—denial, anger, bargaining, depression, and acceptance—all while warrior avatars for our protagonists fight each other on the rooftops of a sleepy village.

“Requiem for Romance”—according to the video’s description, it was “inspired by ’50s Shanghai water ink animation & kung fu films”—has won a slew of awards, including the Best Art Direction Award at Anima Mundi and the AnimAsian Award at the Toronto International Reel Asian Film Festival. Ng’s harrowing short has also received praise online, where, despite being a year old, it was recently picked to be the “Short of the Week” by the Vimeo staff.

The film also caught the attention of the Reddit community, where it quickly jumped to the top of the r/videos homepage. As of this writing, it has collected more than 2,200 karma points and has been lauded by the site’s users.

“I was sad before the dialogue even began,” confessed g000dn.

“I forgot how awful a feeling it is to sit and listen to a dial tone on a call that won’t ever be answered. One of those subtle things that break your heart in a failing/finished relationship.”

But perhaps the best reaction to this wonderful short was written by user TheBigFinkle.

“Shuriken straight to the feels,” he aptly noted.