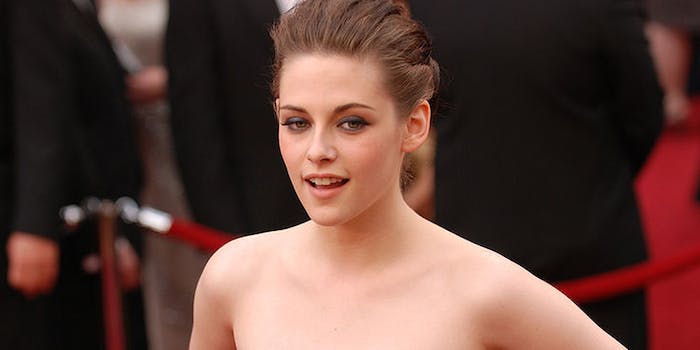 What Kristen Stewart’s revelation means for coming out in 2015

The 'Twilight' star put her sexuality rumors to rest in the most low-key way possible.

When Ellen Page came out publicly last year, the Internet had a heart attack. Many people who identified both as queer and sarcastic jumped for joy as the Juno star finally revealed, using no uncertain terms, that she was gay. Bloggers called her speech “inspiring” and “brave,” and several websites even promised that her speech “will make you cry,” one of the highest forms of Internet acclaim.

Compare this to Kristen Stewart’s “coming-out” in Nylon this week, which was met by equal parts applause and “Wait, what?” The actress, when asked specifically about her sexuality, responded with the following:

“Google me, I’m not hiding …. If you feel like you really want to define yourself, and you have the ability to articulate those parameters and that in itself defines you, then do it. But I am an actress, man. I live in the fucking ambiguity of this life and I love it. I don’t feel like it would be true for me to be like, ‘I’m coming out!’ No, I do a job … I’m just a kid making movies.”

Stewart chose not to use any labels to describe her sexuality: not bi, not lesbian, not even queer. For the 25-year-old actress, labels don’t quite matter and sexual identity is mutable to the point of being irrelevant: “I think in three or four years, there are going to be a whole lot more people who don’t think it’s necessary to figure out if you’re gay or straight. It’s, like, just do your thing.”

Stewart’s vision of a post-sexuality society might seem a trifle idealistic in a country where LGBTQ people are at heightened risk of both hate crimes and unbearable Mike Huckabee jokes. But her story closely resembles the contemporary coming-out narrative, which is slightly less of a spectacle than it was in decades’ past and is more likely to blur gender/sexuality lines. Public figures like Lindsay Lohan and Maria Bello often refuse to pick labels. As Miley Cyrus put it not too long ago, “I am literally open to every single thing that is consenting and doesn’t involve an animal and everyone is of age.”

Stewart might see herself as beyond boundaries and labels. But for many people in the queer community, labeling isn’t a sentimental pastime but a necessity in a heteronormative world: It remains a statement. Queer youth are four times more likely to commit suicide than their straight peers. You can still be fired for being gay in 28 states (and 32, if you’re transgender). Simply saying the word “gay”—in a world where many queer people are still taught that their sexual identity is a sin—is an active of bravery, no matter what all the dingbats on Facebook say.

So where does that leave our beloved K-Stew? Is she a poststructuralist sexual warrior, a modern young visionary, breaking through archaic boundaries and primitive gender tropes? Or is she a craven young lesbian, living under a darkening cloud of internalized homophobia and Nylon magazine interviews? Is she straight? Is she gay? Is she queer? Perhaps most importantly: Will she date us?

The answer, it appears, is, “Who cares?” Unfortunately, as much as folks on all sides of the sexuality divide want to claim her, Stewart is simply human. And as powerful as it would be to have an actress identify as queer—especially in a cinematic landscape so desperate for gay role models—there is nothing more contemptible than assuming someone’s sexuality and then shaming her into showing it. Coming out—however it is done—needs to be on the individual’s terms, not society’s.

Still, we can celebrate how coming out stories have changed over the past 20 years: They raise less eyebrows, inspire less clicks, blur more boundaries. Even Gawker, a publication that once prided itself on outing people, has started to notice the shift. But the attachment we have to a high-profile coming-out has slightly subsided, and the nature of the story itself has changed. People aren’t just lesbian or gay but often queer.

Sexuality isn’t something you “come into” but something you create. Coming out stories continue to matter, and matter deeply. We’re just changing the way we tell them.