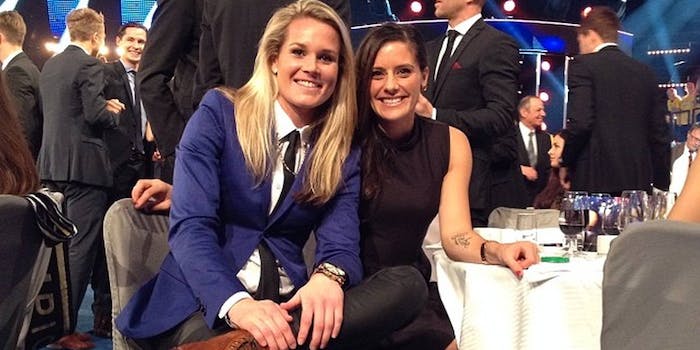 Meet Krashlyn, the fantasy romance that has soccer fans obsessed

They may have won the World Cup, but they also won our hearts.

Fans devoted to “shipping” the two ballers are building Tumblr and Instagram pages devoted to “Krashlyn.” They’ve also made romantic YouTube video collages of the two players together and have written hundreds of femslash (lesbian fan fiction) stories online.

@Kryingkrys I am so in love with #Krashlyn I wish they didn’t have to hide it!!! They are so cute together. pic.twitter.com/Yg8zUYqH4i

While neither of the women have actually come out publicly as gay or bisexual, the pair are undeniably close. The kind of close friends that give each other David Yurman jewels during one-on-one birthday dinners and then post pics of it to Instgram. The kind of friendship that brings one running to the other’s side after a field injury, and never leaving, even as the other is rolled out on a stretcher. The kind of friends that dress up in classy butch-femme gear and attend weddings together arm in arm, looking so smokin’ hot that lesbian fans around the world nearly pass out when the photos are posted.

No one really cares if they are actually a couple or if they are just besties. But Ali Krieger did recently make a subtle nod to potentially being queer, even though she didn’t actually use the words. Fans took the dancing-around-the-subject statement, made in a heavily edited March video with her (out) gay brother Kyle, as a coming out moment.

“My favorite journey is probably the one I’m living right now of feeling totally confident, comfortable and free with my sexuality. I feel that resistance towards, I guess, normative expectations and standards of work and relationships. And I feel like for me, I totally feel more confident now than I guess I was in my 20s with who I am and who I want to become and the woman I am now. And I think that this has been a long journey for me. And I don’t label myself. It’s been a hard journey.”

As for Harris, the long-haired, soft-butch goalie’s Instagram account has become a go-to inspiration for tomboy fashion.

Go get your copy of @darling magazine. #USWNT players are featured in this months issue #darlingissue12 #thatsdarling

And then there was that time Harris helped “judge” a wet T-shirt contest hosted by Pandora Events, “the leading lesbian event company in the United States.” And by judge, we mean dump buckets of water on hot girls in flimsy tank tops and then stare approvingly. 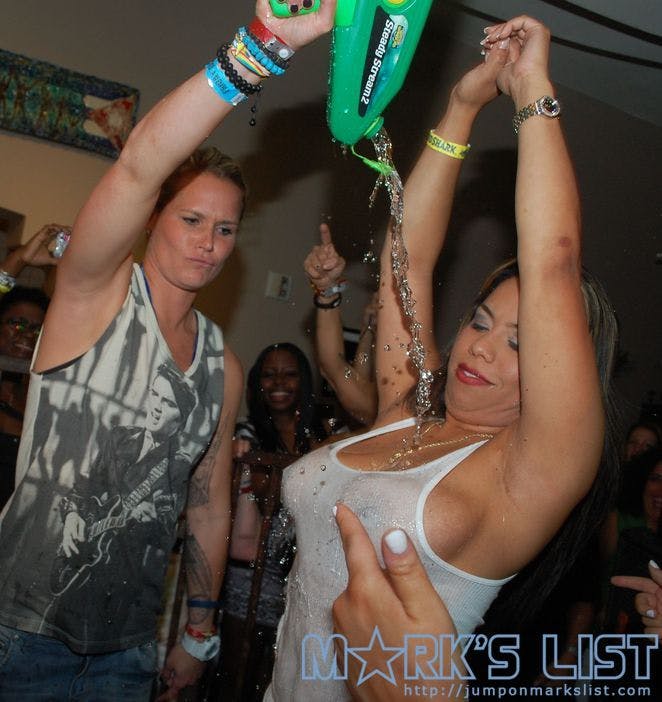 On fanfiction site Archive Of Our Own, over 300 stories about the Krashlyn relationship detail everything from a fantasy pregnancy to the fantasy couple’s decision to withhold their big coming-out announcement until after the World Cup win because they don’t want to steal the spotlight away from the team.

In one steamy draft, Ashlyn accidentally posts a private photo of Ali in her bra to Twitter. She apologizes, knowing how much Ali wants the couple to stay closeted.

“Babe. I’m telling you. I. Don’t. Care. People already know about us and I honestly don’t care anymore. I’m more upset that I didn’t get to use that photo than anything. That was a really good photo.”
And with that, she grabbed my face and kissed me. And I melted into her touch instantly. As she pulled away, I was still caught up in the moment. Eyes closed and everything. When I finally snapped out of it, that’s when I fully processed what Ali had just said.

Steamy! In fact, a large percentage of Krashlyn fanfic is centered on whether or not, and when, the couple plans to come out publicly about their love. It’s kind of obsessive and a little bit weird, but once you catch Krashlyn fever it’s pretty hard not to get wrapped up in it all.

So while the mystery over Krashlyn’s relationship status threatens to drive us all mad, we’ll just keep watching videos like this one—where romantic photos of the pair flash by as Christina Perri sings, “How can I love when I’m afraid to fall.”