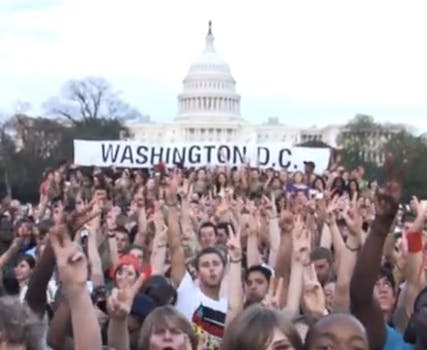 Can a march on the White House revive Kony 2012?

Invisible Children all but disappeared online after the massive viral success of Kony 2012. Will this Saturday's Move:DC march at the White House return the group to the Internet spotlight?

In March, Invisible Children earned more than a million tweets and 70 million YouTube views for Kony 2012, its famous documentary about an infamous man: Joseph Kony.

Seven months and one media scandal later, Kony—a Ugandan warlord who allegedly raised an army of victimized child soldiers—is still at large. And Invisible Children is still calling for action, organizing a march on the White for this Saturday, Nov. 17.

Although it’s not guaranteed to bring Kony to justice, the Move:DC march will definitely accomplish one thing: separating the activists from the slacktivists.

According to the Invisible Children website, more than 11,000 attendees have registered for the march. Six world leaders, including United Nations Secretary-General Ban Ki-moon, have agreed to send representatives.

Kony 2012 may have been one of the fastest growing viral videos of all time, but months later, its buzz has significantly died down. According to Google Trends, searches for “Kony” and “Invisible Children” peaked in March but have flatlined ever since.

After its immediate viral success, the Kony 2012 movement experienced a backlash from critics and humanitarian aid officials, who, according to the New York Times, “resented the video’s presentation of young white Americans banding together to save Africans.”

Kony 2012 was also attacked by Ugandans for seemingly ignoring the genocide the Ugandan government committed in its pursuit of Kony. “[Invisible Children’s] is a narrow perspective. They just want the war to end so that children can go back home. That’s all,” Northern Ugandan politician Ogenga Latigo told CBS in March. (A spokesperson for Invisible Children could not be reached for comment on this story.)

But Kony hasn’t been caught, and Invisible Children has continued its mission despite criticism, waning publicity, and Russell’s dramatic breakdown. The organization’s latest video, “Move,” (which has been viewed a scant 27,000 times since its Oct. 25 release) claims that “the Kony 2012 experiment will reach its peak on November 17.”

Can Invisible Children replicate its Kony 2012 success this Saturday and bring people back to the movement?

It could be a tall order. After all, marching on the White House takes more commitment than sharing a video or sending in $20 for a Kony 2012 Action Kit.