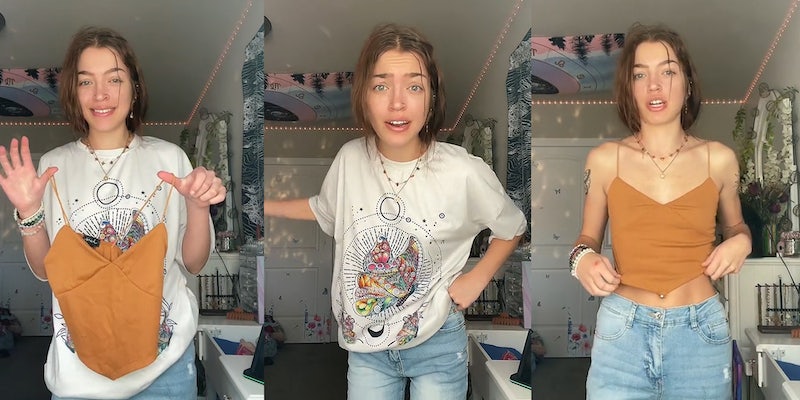 ‘F*ck your dress code. We work at a grocery store’: Supermarket worker breaks dress code on last day before quitting

'Who cares if there's holes in my jeans?'

A King Soopers worker went viral on TikTok after she reveals the outfit she wore to go quit her job.

The video features user Kai (@h8.k8) in her bedroom as she announces to her 432,000 followers, “get ready with me ’cause I’m gonna quit my job today.” Kai doesn’t specify the reason for quitting in this video, only that she wants to make a statement when doing so. Her plan is to defy the grocery store’s dress code by wearing the clothes they sell in-store.

Throughout the video, Kai models different outfits, trying to decide which outfit she should wear. She settles on a pair of ripped jeans that “make her butt look good.” However, she couldn’t decide between three triangular crop tops. Eventually, she settles for the second one along with tying her hair into a ponytail, a belt, hoop sun earrings, a long necklace, and opened-toed sandals.

The video amassed 4.9 views since it was posted on Sept. 3 with many viewers sharing their thoughts about a job’s dress code.

“I don’t understand dress codes at stores bc as long as the person helping me is doing their job, I don’t give af what they’re wearing,” one person stated.

“I always hated the dress code at my old job. I also worked at a grocery store but I didn’t mind the no ripped jeans rule,” a second shared. “[Because] I decided to be a rebellion and I wore them and my jeans got caught on the register and ripped a giant hole and my mom brought me pants. I cried.”

“My job only allowed black jeans I have ONE pair, and it’s a on campus job at my university,” a third said.

“I work in a department store, we aren’t allowed to wear jeans period which is fine for me because I haven’t worn jeans since before high school,” another commented.

Other people were curious about how her quitting journey went. People asked for an update and Kai delivered.

The TikToker uploaded a follow-up video on the same day, sharing how it went. It seemed to go well, minus the interaction she allegedly had with her assistant manager. Kai says she entered the store, with the letter of resignation in her hand, asking to speak to a manager, and the one she didn’t like approaches her. The manager gives her an attitude, not wanting to deal with Kai, and sends her to the other manager.

Everything ends up going well, as Kai hands the letter to the manager she actually can tolerate. He gets some paperwork ready and she signs it, officially leaving the company.

According to previous and follow-up videos, Kai’s reason for quitting after three years was in part to King Soopers’ “toxic” work environment, including her “drama-filled” co-workers. But the main reason was that Kai landed a new job at a childcare center and needed to quit her old one to start the new one.

The Daily Dot reached out to Kai for comment via TikTok comment and King Soopers via press email.