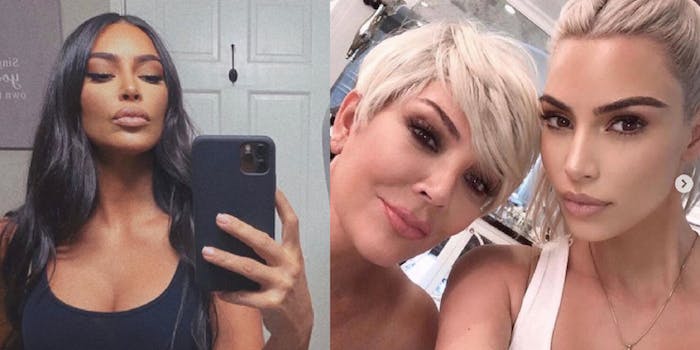 'Why do we base GOALS on how skinny a woman can get after birthing a human?'

Kim Kardashian is receiving some backlash after posting throwback pictures to her Instagram of her mom, Kris Jenner—subtly bragging about how skinny she was after giving birth to Rob Kardashian.

The post in question celebrates Jenner as the “best mom in the entire world!” in an apparent Mother’s Day tribute. Kardashian ended the caption by saying, “And the first pic I posted of you in the bikini after you gave birth to Rob is MAJOR GOALS!!!”

The photo shows Jenner’s toned body, but doesn’t address how long after giving birth to Rob Kardashian it was taken. Kardashian also shared the picture to Twitter.

But the image—and accompanying caption—left some fans to comment on the photo arguing that Kardashian shouldn’t place so much emphasis on Jenner being skinny post-childbirth.

“Why do we base GOALS on how skinny a woman can get after birthing a human?” wrote Twitter user, @sopheeclaire

Despite some negativity, other fans praised how good Jenner looks and likened her to her daughters.

“Kris is and has always been a babe,” one user wrote.

Kardashian revealed one of the reasons she posted the photo was to share the gift she bought Jenner for Mother’s Day.

“I purchased the camera he used on their wedding day and the photos and made an album for her. She never had those photos so to see them brought out so many happy tears,” Kardashian said.