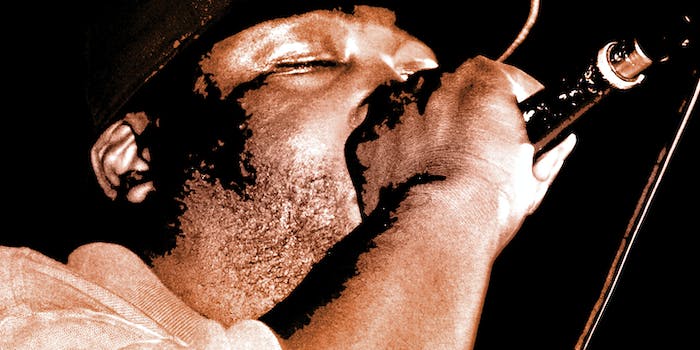 Is Killer Mike the voice of hip-hop’s political conscience?

What happened to hip-hop's conscience? Killer Mike aims to answer that question.

From the beginning, hip-hop has been considered to be modern revolutionary music and the voice of disenfranchised youth. After numerous tragic and fatal encounters this year between police and minorities, the perceived injustices surrounding Michael Brown’s death and its handling, and the subsequent mass protests around the nation, many want hip-hop artists to be the soundtrack to their outrage.

When called upon to speak on social issues, however, most rappers either decline to comment or fumble the ball altogether. Since the passing of Tupac Shakur, the genre’s loudest voice on social issues, hip-hop has searched for someone to fill the void he left behind. Some are beginning to ask if Killer Mike is the man for the job.

Killer Mike — a name he adopted because he “kills microphones” — won a Grammy for his contribution to the Outkast song “The Whole World” and will begin lecturing at Morehouse College in Atlanta next year. Mike has long been a proponent of civil and Second Amendment rights and has held his own against the likes of Fox News’s The Independents. Whereas most rappers prefer to share their opinions through their music, Mike relishes every opportunity to speak publicly.

Just this past November, Mike appeared on HuffPost Live and CNN, and he delivered an impassioned speech to a live audience immediately following the grand jury decision not to indict officer Darren Wilson for the killing of Michael Brown. On December 1st, Killer Mike co-authored “Poetic (In)justice,” an op-ed piece that ran in USA Today. The piece discussed the stigma attached to rap music in the criminal justice system and the double standard with which its lyrics are used as evidence against defendants.

While some disagree with his political views—better-trained cops, an end to the drug war, reinforced constitutional rights, guns for everybody, and condemnation of Ronald Reagan—almost everyone respects his willingness to share them and to encourage others to do the same.

Killer Mike’s visibility and willingness to opine on issues via any medium available suggest that, at a time when hip-hop lacks its usual conscience, he is the artist whose music and contributions most reflect the times.

Because, as he explained in an interview, Mike is “not a part of a company that spends an extravagant amount of money with the people that are telling you what’s cool,” he’s in a position to speak his mind without worrying about blowback from endorsers. In short, he is not mainstream enough to be compromised.

But can an artist who is pseudo-underground like Killer Mike truly be considered the voice of a whole culture? There are plenty of up-and-coming rappers eager to join in on the Ferguson discussion—Timbaland’s latest signee, Tink, dropped an enlightened track titled “Tell The Children”—but with such small fan bases, few other rappers can be heard over the racket that is popular music.

More commercially successful artists like Q-Tip, Macklemore, Wale, Chris Brown, and Nelly have taken to actually joining protesters on the ground, while in August, J. Cole was the first mainstream star to make a trip to the site of Mike Brown’s shooting, and Donald Glover tweeted out a powerful poem about race and violence in America.

@qtiptheabstract leading #TimesSquare protesters in chants of "Whose streets? Our streets." #Ferguson

It is Killer Mike’s ability to do it all—to rip tracks with a “conscious” message, to communicate his views eloquently on TV, and to step on stage and incite a crowd to action—that sets him apart. He would not usually be popular enough to be the mouthpiece of the entire culture, but with hip-hop’s usual political leaders like Nas and Kanye West silent and with Jay-Z wrapping up other political projects, Mike will more than suffice in their stead.

Mike serves as a willing rallying point for hip-hop at a time when it is firmly united on an issue and in need of a voice. It appears Mike will excel as just that. Sure, he may not yet be the voice of hip-hop’s social consciousness, but he certainly is a voice—one of the best that hip-hop has got.