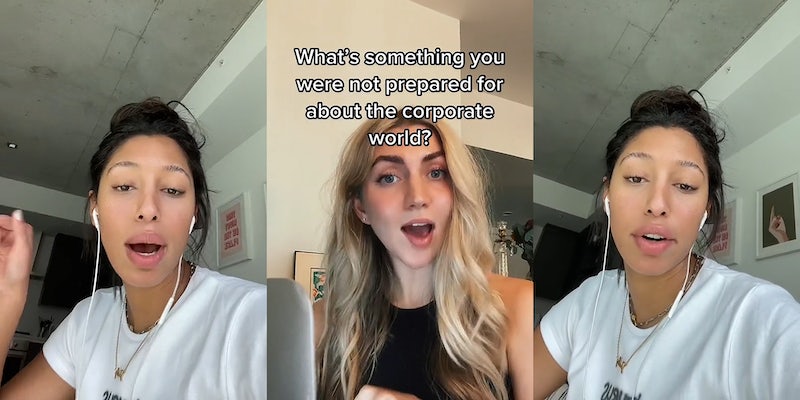 ‘Every word she spoke is the truth’: Worker says you have to be ‘an a**-kisser’ to get promoted in the corporate world, sparking debate

'You can be the best, but if you’re not good at kissing a**, you’re not getting anywhere.'

A worker has gone viral on TikTok after sharing a lesson she says she learned in the corporate world.

In a video with over 667,000 views, TikTok user Shelby (@shelbymayfield) stitches with a video that asks users to state “something [they] were not prepared for in the corporate world.”

“You have to be an ass-kisser to get promoted,” Shelby responds. “You can be the best, but if you’re not good at kissing ass, you’re not getting anywhere.”

According to employment experts, Shelby’s claim is at least partially accurate. As a BBC article from September of last year put it, “More often than not, those who rise are the ones willing to politick their way to the top, while you were too busy just working hard to notice you should be working the room.”

“People work really hard and deliver fabulous results and hope that the right people notice and come along and place a tiara on their heads. But that usually doesn’t happen,” Carol Frohlinger, president of U.S.-based consulting firm Negotiating Women, Inc, explained to the BBC. “One of the things that can happen to people who do good work and nothing else is that they’re under the radar. So, when there’s an opportunity for promotion, nobody thinks of them. They’re just forgotten, in a benign sort of way.”

Worse yet, Frohlinger notes that, after they’ve accomplished a task at work, women face difficulties showing their work in a socially acceptable way, leading to their efforts receiving less attention.

“For women, it can be seen as bragging, and bragging women can be punished,” Frohlinger details.

Getting attention, then, requires a bit of what Shelby might call “ass kissing.”

“You need to be liked: by people at your level, by people above you and by people below you,” Frohlinger stated, per the BBC. “When you evaluate work, the research is quite clear – people who are liked get better ratings, even if their work is the same.”

“Sadly true, your evaluation is based mostly on ‘personal’ and not professional results,” a commenter offered.

“I think most work places are like this,” another agreed. “It doesn’t matter what you do but who you know and who likes you. Sadly u can’t be neutral and just work.”

“I’ve been in the corporate world for 21 years now and every word she spoke is the truth,” a third wrote.

The Daily Dot reached out to Shelby via Instagram direct message.