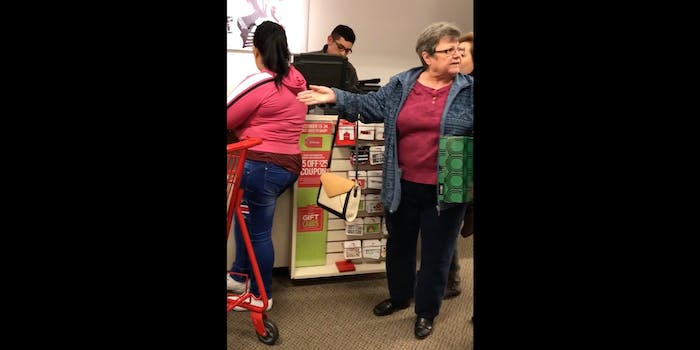 The woman told the Latinx shopper to 'go back wherever the f**k you come from, lady.'

A shopper went on a racist rant in a Louisville JCPenney, directing her comments at a Hispanic woman who allegedly cut ahead in line.

Renee Buckner posted a video of the interaction on YouTube entitled “Racism is still a huge problem.” In it, an older woman is telling a Latinx shopper, “You’re nobody as far as I’m concerned. You’re probably on welfare. … It don’t bother me if I say it, and I don’t care if everybody hears me.”

After a number of people in line appear to agree with the woman, she tells the woman in front of her, “Go back to wherever the fuck you come from, lady.” It devolves from there.

Both the Jefferson Mall and JCPenney condemned the conduct of the racist harasser, assuring customers that this kind of behavior will not be tolerated.

Jefferson Mall, in a statement on Facebook, said that the woman will be banned from revisiting the mall due to the Behavioral Code of Conduct, which forbids patrons from “using obscene language, obscene gestures, or racial, religious, gender, or ethnic slurs.”

There’s no explicit evidence to support that this woman felt emboldened by recent election results. However, similar instances of hate speech and hate crimes have been on the rise since President-elect Donald Trump‘s election victory, particularly toward Latinx and Muslim people.