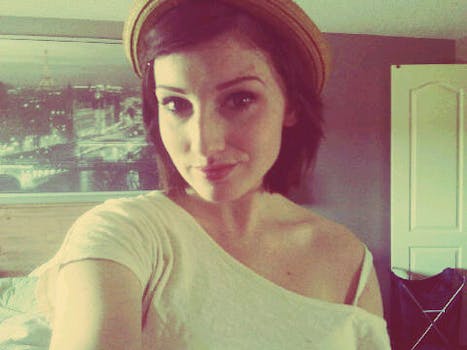 Kathleen O'Hurley started tweeting because she was bored. Now she does it to entertain. And she does.

About two years ago, Kathleen O’Hurley, 24, was in a horrific accident where she suffered a shattered hip.

The injury caused her to use a wheelchair for six months.

With not much to else to do, O’Hurley, who lives in Toronto, Canada, joined Twitter under the name Slashleen, covering the usual topics of the twitterati–sex, celebrities, and everyday life–but with a raunchy, visceral edge.

Today, O’Hurley has more than 56,000 followers on Twitter, hundreds of fans on Tumblr, and has been called “prolific” by comedian Patton Oswalt.

“My inspiration comes from my daily life,” O’Hurley said. “I obviously do not run around setting things on fire and putting household objects up my butt, but I’ve always had a pretty wild imagination.”

That wild imagination has helped O’Hurley come up with some tweets that will leave you in stitches or dry heaving in disgust.

Take a look (but beware, some of these tweets are not safe for work or life):

“When I pay for my groceries and the cashier hands me the receipt I like to smile and say “this will all be poop soon.”

“Drank so fast I skipped the fun part and went straight to the fridge crying part.”`

O’Hurley’s life isn’t as sick or perverse as her tweets make it out to be. Her parents have been happily married for more than 30 years (despite what she says on Twitter) and O’Hurley lives a relatively obscenity free life as a college student.

Since her Twitter account has taken off, O’Hurley has regularly received messages from people calling her “a 40 year old pervert tweeting these gems from my nerd dungeon.” To answer all these naysayers at one, she created a Tumblr account where she posts photos and info about herself.

“Showing my real side on my blog has been a very good thing, because I don’t get many of those replies anymore,” she said. “Now that people have a better idea of who I am, they (hopefully) appreciate my humor more, but I am not a comedian and I try not to think about what implications my gender has in a world I don’t really consider myself a part of.”

O’Hurley says some of her tweets have caused a bit of controversy, especially those that deal with rape.

Take this tweet, for example: “A picture is worth a thousand words. In the case of my drivers license, all of those words are ‘rapist.’”

In response to this sort of tweet, O’Hurley says people have cursed her out on Twitter and sent her death threats.

“I’d like to think it made me a stronger person,” O’Hurley said. “I don’t believe there’s anything that can’t be joked about if the joke is written properly. Whether or not my rape joke was well written is another discussion entirely.”

O’Hurley is unsure what the future holds for her comedy but is excited to find out.

In the meanwhile, she plans on perfecting her Twitter style.

“Tweeting is a skill that I am constantly developing, like a giant brain tumor, that’s started to affect how I function altogether,” she said. “I think differently now.”