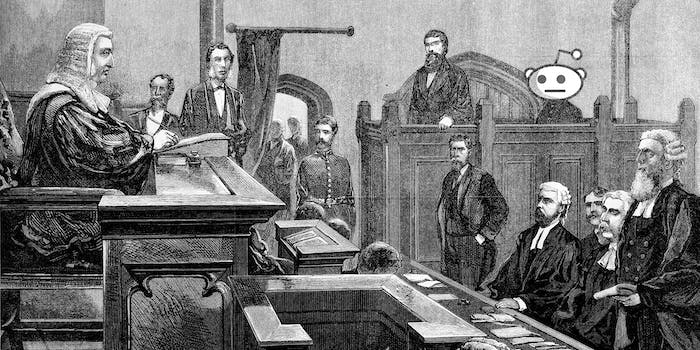 The Karma Court subreddit is the online equivalent of Judge Judy, where users can bring their compatriots to trial for crimes against Karma.

I once tried to ban the the mention of Doge on a Reddit forum. This was long before the Doge meme went viral. It was, at the time, simply a vastly irritating picture of a gormless dog with Comic Sans font surrounding it. I made the decision while quite drunk and have regretted it ever since because, as a result of the decision, I have been sued by a group of Dogecoin activists and deluged with Super Shibes.

This might seem like just another legal battle between Doge fundamentalists and the law. But this wasn’t any normal Reddit forum, and I’m not a normal Reddit user. I am, for my shame, a judge and attorney in r/KarmaCourt.

Now, I still stand by this judgement of mine, despite the fact it was later struck down as “unconstitutional.” And in spite of this one particularly poor decision, the whole ordeal reminds me why r/KarmaCourt is one of the most fantastic parts of Reddit—especially in a time when most of the social news site is dominated by reposted jokes and unimaginative memes.

While Judge Judy may be the queen of courtroom drama on television, the Karma Court subreddit is her online equivalent. This increasingly popular part of Reddit is where users can bring their compatriots to trial for crimes against karma, the points system for users posting interesting and original content.

However, the giving and taking of karma on Reddit often ends up being a popularity contest, which is why countless “reposters” end up in Karma Court during their quest for Internet validation. Their crimes can include lying about the context of posts on Reddit, reposting what isn’t theirs and taking credit for it, or sometimes failing to deliver on promises to redditors within the comments. The community, which has only been in existence for a year, has seen some explosive scenes and has even prosecuted real-world celebrities.

The Constitution of Karma Court, updated monthly as needed, was “drafted in the interest of protecting the enjoyability and originality of the website Reddit.” The concern is a genuine one. Just as Reddit’s userbase is growing, so are claims of its level of humor being degraded as a result. The basis of the rules on Reddit is that of reddiquette, a set of guidelines to create a good community, original content, and good discussion that have long been ignored by many of the site’s users.

Karma Court provides an avenue to combat this decline. The court’s constitution, written in humorous legalese, is impressive and spans six separate articles. Example charges that can be levied by “The People of Reddit” range from the obvious (“Douchebaggery – When one is being a douche”) to the Reddit-specific (“GrandTheft.jpg – Reposting while claiming credit for the post”). While they seem at first glance immature, the legal arguments in the trials themselves will convince you otherwise.

On a scale of seriousness, the trial of croatianpride was at the more amusing end. The redditor had promised to stream himself eating a shoe if a goal on the online multiplayer game Dota 2 was made. For over two months, the r/DotA2 subreddit waited, until finally the time came for croationpride to stomach his pride and eat the shoe. As with many promises on the Internet, it never happened. However, rather than simply admitting guilt, the user in question never appeared to answer the charges. Instead his failure became a point of Croatian national pride, resulting in countless Croatian redditors apologizing on his behalf.

On the other end of the scale, in one of the most-viewed cases the court has examined, a prosecution was formed against a user named VolumeZero who had reposted a picture without any reference to the original poster, or “OP.” The theft received a mountain of downvotes and, as a result, ended up in Karma Court.

In a complex case that spanned more than 415 comments, exhibits were gathered trying to illustrate VolumeZero’s guilt, including timestamps and “guilty” comments that proved the karma theft. Long debates occurred and a large segment of the case came to rely on whether VolumeZero was simply reposting or claiming the picture as his own.

The prosecution relied on his use of the personal pronoun “I,” which the defense said was merely a joke his client was making. VolumeZero was found guilty and sentenced to “being tutted at, once, by one person on the other side of the street, and discretely, under their breath.”

But it’s not just regular redditors who will hear the wrath of Karma Court attorneys and judges, but also celebrities. In a case that I levied, popular Star Trek actor Wil Wheaton was found guilty of stealing a previously made post and “Wheatoning in the 2nd Degree”.

Other well-known defendants include a number of writers for Wired who were found guilty of, among other things, “Being a bunch of cheap sons of bitches” after they exploited Reddit to get free pizza. This incident involved the writers posting to r/random_acts_of_pizza, a subreddit where redditors can request pizza from their generous compatriots. The Wired reporters then wrote an article about their experience, which the community didn’t like, subsequently landing the magazine in Karma Court.

But the obvious satire that the subreddit offers is sometimes misinterpreted by its users, with bizarre results. It’s been proposed, for instance, that the Court become a more serious punishing body. There are also occasions of deep infighting within the judiciary. Those who spend the most time in Karma Court often bicker, and sometimes those involved never post again in the subreddit due to the fighting.

Some other redditors have criticized the court for being behind what is seen as an increased focus on attaining large amounts of karma, rather than being part of a positive community. But to some extent, Karma Court mocks that idea by simply existing, and it is not too wildly different to the kangaroo courts that exist in reality TV shows. There are star judges, each usually known for their unique entrance into a case, such asaudiophile0921, who once entered with the following:

“A motorcycle bursts into the courtroom suddenly with unidan in drag and fires a shotgun in the air. JUSTICE AUDIO IN THE FLESH!!!! THIS COURT DOES NOT CONDONE ANY DAMN DOWNVOTE BRIGADING!!!!!!”

There are also disgraced judges like corrupt_spartan, who simply snapped after having a public spat with several other judges one day. He went from a friendly court member to a destructive user who has since deleted his account.

Since Karma Court can appear overwhelming, many of the accused redditors don’t actually take part in the cases against them, and a Karma Court attorney represents them instead. An attorney can be any redditor who volunteers, or a more experienced member of the community. Attorneys in the subreddit can pursue qualifications at the Karma Court Law School.

My experience with Doge summarizes Karma Court rather well. It’s clearly a well-meaning community, boasting bad elements like any subreddit. But on another level, besides the poor humor of the Doge activists, the satire is a wonderful antidote to some of the daily arguments that Reddit can have over karma.