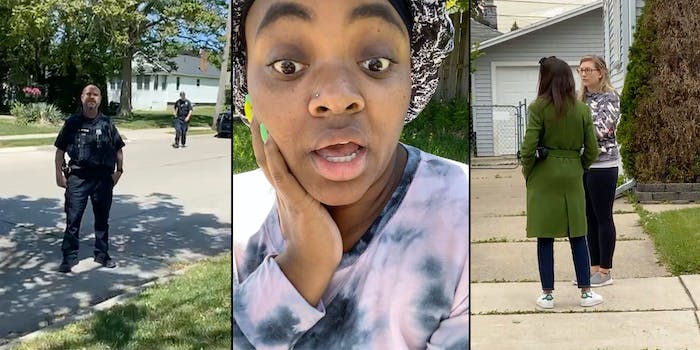 ‘What am I doing that’s wrong?’: Karen calls cops on Black woman, lands her with a ticket for talking on the phone

A Karen who recently moved to a Detroit metro area neighborhood was apparently upset that a Black woman was walking up and down their street, talking loudly on her phone. She called police to the scene, who not only responded but wrote the Black woman a $385 ticket, charging her with being a “public nuisance.”

The story comes from Eastpointe, Michigan. Diamond Robinson posted a Facebook Live video of the incident on May 27, showing three officers coming to her house at the behest of a Karen who complained about the loud phone conversation she was having.

In the video, Robinson maintains that talking on her phone outside is within her rights. Early in the video, after one of the officers asks her to go into her house—which she’s not interested in doing—she asks the officers, “How am I going to go to jail? What am I doing that’s wrong?”

Even though she tells the officers that she’s recording the incident, they proceed with writing up a citation. They contending that Robinson created a public nuisance, which comes with a $385 fine.

She continues her narration after the officer leaves, wondering what the Karen—a neighbor across the street she identifies as “Rebecca” and, alternately, “Miss Rebecca”—might do should she mow the lawn, hold a party at her house, or even sit on her grass outside.

“I’m just trying to figure this out, Facebook!” she exclaims.

Robinson has since garnered media attention as a result of the Facebook Live posting, calling Fox 2 Detroit about the incident. In a video she posted to Facebook the same day as her original Facebook live posting, she documented the reporter who heard her side of the story also talking to Rebecca.

“Just got done interviewing with Fox 2,” she said in that second May 27 post, relaying that Rebecca was concerned about “sort of criminal charges about a restraining order that she got out on someone.” She said that she “is afraid, don’t want her house on the news and she don’t want them to know where she lives.”

“If someone is trying to hurt you, do you think it’s a good idea for you to call the Eastpointe police on your neighbor that is walking up and down the block that is clearly minding her own business?” she wrote in the post. “You can’t be afraid of the person you have a restraining order against if you are walking up to me 5 houses down on the opposite street of your home and telling me that I’m talking 2 loud.”

In the Fox 2 Detroit story that posted to its site May 28, the reporter pointed out that Rebecca is white, adding, “And that’s an important part of the story, because Diamond believes she’s being targeted because she’s Black.”

“A lot of these things are being pushed under the rug and they don’t need to,” she told the reporter. “We can sit here all day and we can chant, we can riot, and we can do all of those things [but] that is not going to make a change if you don’t speak up at that time, at that moment.”