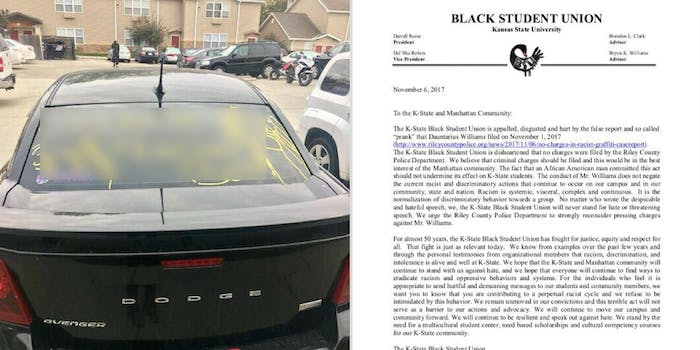 Even though the racist graffiti wasn't 'real,' the community's reaction to it was.

A false depiction of a hate crime has Kansas State University’s Black Student Union calling for criminal charges against the Black man responsible for writing racist graffiti on his own car.

The Riley County Police Department in Manhattan, Kansas, states it was called on Nov. 1 about a vehicle at an apartment complex near the Kansas State campus that had been defaced with racist and threatening graffiti.

Photos of the vehicle went viral on social media, causing outrage and fueling racial tensions around the campus and community. According to the New York Post, the racist graffiti had come after three other similar incidents at the school: In October, an anti-gay slur was found tagged outside the student union; in September, white supremacist fliers were found on campus; and in May, a noose was found hanging from a tree on campus.

The latest incident sparked meetings with the Black Student Union and administrators, increased campus security, and led to an FBI investigation into a possible hate crime.

One week later on Monday, Nov. 6, the department issued a statement that while questioning the vehicle’s owner, 21-year-old Dauntarius Williams, he admitted to being responsible for the graffiti. In response, county prosecutors decided not to file criminal charges against Williams for filing the false police report, as they felt charges would not be in the best interest of the community.

“While Williams’ mistake had a decidedly negative impact on the community, please recognize that he, like many of us when we were young, is a young man who made a mistake and is now doing his best to own up to it,” Riley County Police Department Director Brad Schoen told Kansas City station Fox 4 at the time.

Williams apologized in a statement shared via the department, writing that the graffiti was a Halloween prank that had gone too far.

“I would like to deeply apologize to the community. The whole situation got out of hand when it shouldn’t have even started. It was just a Halloween prank that got out of hand. I wish I could go back to that night but I can’t,” Williams wrote. “I just want to apologize from the bottom of my heart for the pain and news I have brought you all.”

However, Williams’ apology is not enough for the university’s Black Student Union, which has called upon the county to re-evaluate its decision to not file charges against him. In a statement posted to the organization’s Facebook page, the union wrote it was “appalled, disgusted, and hurt” by the false report, and is “disheartened” that charges weren’t filed—the fact that Williams is Black shouldn’t undermine how his actions affected the campus, the union argues.

“The conduct of Mr. Williams does not negate the current racist and discriminatory actions that continue to occur on our campus and in our community, state, and nation…No matter who wrote the despicable and hateful speech, we, the K-State Black Student Union, will never stand for hate or threatening speech,” the union wrote. “We urge the Riley County Police Department to strongly reconsider pressing charges against Mr. Williams.”

The Riley County Police Department has not immediately responded to the Daily Dot’s request for comment.