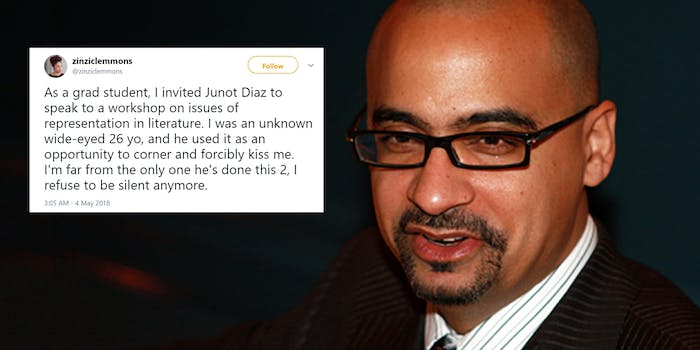 Pulitzer Prize-winning author Junot Diaz has an alleged history of sexual misconduct and abuse, according to multiple personal accounts being shared on Twitter on Friday.

Zinzi Clemmons, author of What We Lose, accused Diaz of cornering and forcibly kissing her after she invited him speak at a workshop on issues of representation in literature. In her tweet, which she posted on Friday, she said she’s “far from the only one” he’s treated that way.

Diaz, who penned The Brief and Wondrous Life of Oscar Wao and This Is How You Lose Her, has been widely regarded for his compelling storytelling about the Dominican-American experience. In 2008, he received a Pulitzer Prize for his writing and in 2012 he received a MacArthur Fellowship, also known as a “Genius Grant.”

Clemmons’ tweet opened up a downpour of tweets from other women, who cited a multitude of troubling situations with Diaz.

Prob 7 or 8 years ago I attended a talk by Junot Diaz followed by a Q&A. A white woman, early twenties, asked a question related to an autobiography she was writing. He looked at her, a woman he had never met or spoken to, and responded, "you don't have a story to tell."

I was 32 and my first novel hadn’t come out yet. I was invited to a dinner and sat next to him. I disagreed with him on a minor point. He shouted the word “rape” in my face to prove his. It was completely bizarre, disproportionate, and violent. https://t.co/WQr0hLW8Z5

The dinner just got worse from there. I’ve never experienced such virulent misogyny. Every point I made—ABOUT issues women face in publishing—he made a point of talking over me, cutting me off, ignoring me to talk to the other (male) scifi writer at the table, who played along.

He didn’t physically assault me. But shouting the word “rape” in my face after knowing me for maybe ten minutes is absolutely verbal sexual assault. I left that dinner halfway through.

And I’d sat down so excited to meet one of my literary heroes.

Author Carmen Maria Machado also detailed an experience she had with Diaz while he was touring his book, This Is How You Lose Her.

“During his tour for THIS IS HOW YOU LOSE HER, Junot Díaz did a Q&A at the grad program I’d just graduated from,” Machado tweeted. “When I made the mistake of asking him a question about his protagonist’s unhealthy, pathological relationship with women, he went off for me for twenty minutes.”

Machado said Diaz debated with her in front of a full room of people—who said nothing during the exchange—and then later vindictively read the excerpts from his book that she called attention to as troubling.

During his tour for THIS IS HOW YOU LOSE HER, Junot Díaz did a Q&A at the grad program I'd just graduated from. When I made the mistake of asking him a question about his protagonist's unhealthy, pathological relationship with women, he went off for me for twenty minutes. https://t.co/7wuQOarBIJ

He asked me to back up my claim with evidence. I cited several passages from the book in front of me. He raised his voice, paced, implied I was a prude who didn't know how to read or draw reasonable conclusions from text.

When I suggested that maybe my question had been answered, and he move on to someone else's question, he refused. He told me he was leaning on me to explain myself, which is what he did with his students. (Never mind that I wasn't his student, or a student at all.)

Every time he asked me a question, I answered it, and he became freshly enraged when I refused to capitulate. This went on and on and on and on until he finally ran out of steam.

And this happened in a room full of people! There's a recording! He was not embarrassed about his behavior at all. A friend of mine was so stressed out from the whole interaction that she texted me saying she'd have to leave so she could go home and take a Xanax.

And I'll never forget: his male handlers (presumably from the university? I don't know) were sitting directly in front of me, and every time he spoke they nodded enthusiastically and in unison, and every time I spoke, they froze. When I think about those men I want to scream.

That night, I went to his reading at a local venue. When he got up after his introduction, he said, "Today, someone complained that there was too much cheating in this book. This is for them." Then he read the stories/passages I'd cited hours earlier.

I'd obviously struck a nerve, though I didn't understand precisely how. Because even if his book contained autobiographical material, I knew that reacting to a reader's criticism this way—confusing yourself for the character—was amateur hour. I knew it even then.

And, like, I was raised with weird Latinx gender shit that I'm still trying to unload and unpack. I know what it looks like. Nothing that I'm describing is particularly novel or unusual. It's just how certain men assert their power.

In the intervening years, I've heard easily a dozen stories about fucked-up sexual misconduct on his part and felt weirdly lucky that all ("all") I got was a blast of misogynist rage and public humiliation.

And it sucks for a very particular reason: people of color are so underrepresented in publishing, we have deep attachments to those who succeed. People are defensive about JD because there are so few high-profile Latinx authors. I get it. That doesn't change the facts.

Junot Díaz is a widely lauded, utterly beloved misogynist. His books are regressive and sexist. He has treated women horrifically in every way possible. And the #MeToo stories are just starting. ¯_(ツ)_/¯

Others cited an essay Diaz published in the New Yorker in April, in which he discussed abuse he experienced as a child and how it influenced relationships he had with women as an adult. Many viewed his piece as an attempt to preemptively excuse future reports of misogyny and abuse.

I hadn't been keeping up w/ Junot Díaz recently. But to hear that he'd written some article for the New Yorker in April, confessing that "he hurt women" & finding out that it was probably a preemptive cover for the misogyny & assault he's committed against them is reprehensible.

Didn't name Junot Diaz when I first put out this tweet but had him in mind, and now I see my Twitter timeline full of the women speaking out, and we can clearly see how his New Yorker piece is both distraction and a preemptive attempt to smother criticism. https://t.co/J4qTYVmnVk

In the New Yorker, Junot Díaz told us how he moved through phases of ‘hurting women’ as a result of his own considerable, awful trauma.
But trauma is no excuse for misogyny.
Women should not have to suffer so that you can heal.
When do we get to heal?

I made the mistake of sharing that article without recognising just what Junot Diaz meant when he said “I hurt women”. I thought he was taking responsibility for cheating and hurting women emotionally. Now I realise how deeply wrong I was.

The essay Diaz published was originally lauded by many as shining a light on male sexual assault. But now, more troubling aspects of the essay have been dissected, including a section of the essay in which he says he “hurt women.”

The Daily Dot reached to Diaz but hasn’t heard back. So far, no official charges have been filed and he has yet to comment about the accusations.