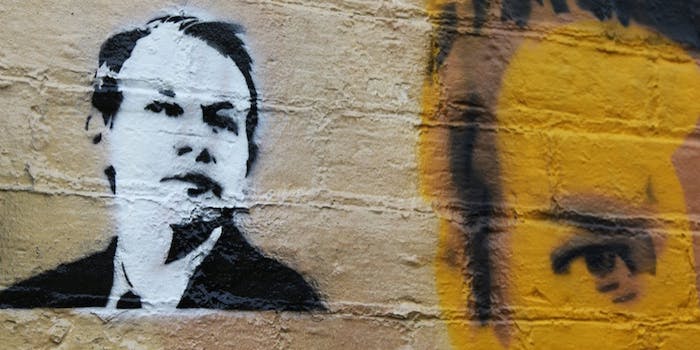 Julian Assange had a fantastic year in confinement

WikiLeaks founder Julian Assange has been holed up in the Ecuadorian embassy in London for one year. And what a year it's been!

WikiLeaks founder Julian Assange has now spent one year inside the Ecuadorian embassy in London. He has has such a wonderful time that he recently expressed his intention to remain there even if sexual assault charges against him in Sweden are dropped.

Well, also, he said he fears arrest by American authorities, though he is not currently facing any U.S. charges. But given what he’s done in the last year, it’s six of one, half dozen of the other.

Let’s skip down the primrose path of dalliance with our favorite etiolated high-tech St. Sebastian and see what he’s accomplished in the last 365 days. (Alas, his appearance on The Simpsons 500th episode was recorded “from a secret location” prior to his residency at the embassy.)

JANUARY 2013. Assange indicts the documentary on WikiLeaks, We Steal Secrets as having “an unethical and biased title.” He also attacks the fiction film The Fifth Estate, based on Daniel Domscheit-Berg’s book, as a “massive propaganda attack,” claiming to have received a leaked copy of the script. He dismissed both films at length during an appearance on Democracy Now. (Three months later he will refuse a request for a visit by actor Benedict Cumberbatch, who is playing Assange in The Fifth Estate.)

Helped by his father filing the proper papers, Assange announced his intention to run for an Australian Senate seat as a candidate for the newly-formed WikiLeaks Party. While it may be possible to run for the office without being in country, if he wins in September, he will need to take up his seat within two months to claim it. Otherwise, it will be given to another member of the seat holder’s party.

FEBRUARY 2013. In absentia, Assange receives a “special award” from Yoko Ono’s Imagine Peace Foundation during the 2013 Courage Awards for the Arts ceremony in New York City. 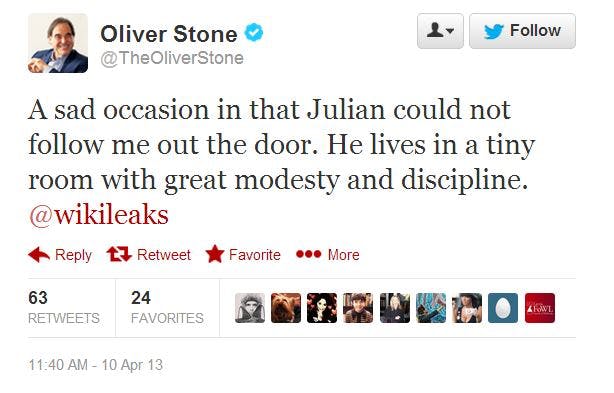 JUNE 2013. Assange praises NSA whistleblower Edward Snowden, encouraging him to run to Latin America, for its decade-long push for human rights and “long tradition of asylum.” Assange claims to have had “indirect communication with (Snowden’s) people,” telling Australia’s ABC cryptically, “I don’t think it’s appropriate at this time that I go into further details.”

Assange met with Latin music star René Pérez, known as “Residente,” in Puerto Rican rap rock group Calle 13 for a “live song-writing session.” According to a press release from the band, the song “will focus on the subjects of disinformation and media manipulation, with Residente and Assange offering a first verse as a guide to build on, with public response.” They are continuing to collaborate online together and with the help of fans on Twitter via the hashtag #JulianAssangeCalle13. Calle 13 plans to release the song on its next album.

A year in confinement seems grim, regardless of the distractions willing supporters and his own celebrity may offer, until you remember that Bradley Manning, the U.S. Army private who provided Assange with a lion’s share of his leaked materials, spent three times that long in pretrial detention. In a real prison. With a life sentence a very real possibility.

I’m sure Manning would have loved a chance to host a TV show, but the awkward private is just not as telegenic. Or as fortunate.