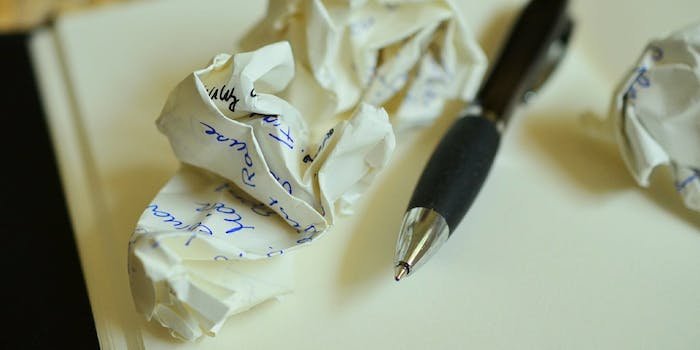 A well-intentioned but a bit misguided punishment.

As your mother always told you, if have nothing nice to say, don’t say anything at all.

Seriously, don’t—you might have to end up saying the nice things as punishment, like one Hawaii judge has ordered a man to do for his ex.

According to the Associated Press, Maui Second Circuit Judge Rhonda Loo ordered 30-year-old Daren Young to write 144 compliments about his ex-girlfriend as part of his punishment for violating her protection order, for which he pleaded no contest. Young is to write one “nice thing” for every “nasty thing” he said in calls and text messages he’s accused of sending her. He’s also not allowed to repeat words while writing.

In addition to his poetic punishment, however, Young was also sentenced to two years’ probation, 200 hours of community service, and $2,400 fine. Prior to sentencing, he had already served 157 days in jail, which he received credit for. So, yeah, even if writing these 144 compliments—technically 144 complimentary words describing her, according to online court documents—seems like a slap on the wrist, he’s doing his time.

But as far as actual punishments go, attempting to have Young symbolically replace whatever mental or emotional turmoil he put his ex-girlfriend through with positive affirmations is well-intentioned but ultimately misguided. No amount of written “nice things” could correct 144 calls and text messages used to violate a protective order and potentially harass a women who went so far as to legally prevent this man from being in contact with her.

I can’t claim to know the content of those calls and texts, but using a list of compliments as a remedy invalidates this woman’s trauma. Thinking this as an appropriate “punishment” suggests these 144 strung-together words are an equitable trade for the psychological wearing-down, if not outright violence, that women often face in situations of domestic abuse.

Perhaps this teachable moment would be more beneficial to Young, and to his ex-girlfriend, if his punishment helped him better understand how his actions affected his ex and other women in similar situations. Perhaps he would be more dissuaded from violating women’s boundaries, even if only via text, if he understood the gravity other women feel from the persistence from men like him.

How about, instead, he research and write out 144 statistics about domestic abuse, or read 144 different accounts from women who have survived domestic abuse situations. Or make 144 of his volunteer hours mandatorily benefit women’s shelters, even indirectly. Maybe he has to listen to 144 recordings from calls made to domestic violence hotlines—too far? Perhaps. But the point is clear—the symbolism behind Judge Loo’s order is heroic, but it’s a lousy lesson that downplays the actual harassment that this woman might have experienced via 144 points of contact.

While Young must also write an apology letter to his ex-girlfriend, he cannot contact her without prior permission from his probation officer, and he’s already told Judge Loo that he’s moving on with his life. Which is a relief—I doubt any person with a protection order against their ex would want that person to fixate on them any more than necessary.