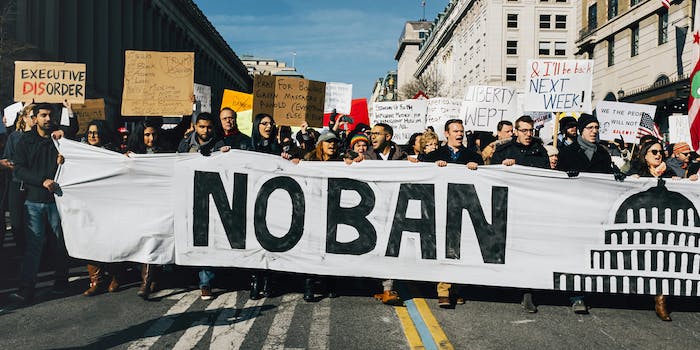 The DOJ says it plans to appeal the ruling.

A federal judge in Hawaii on Tuesday blocked the third iteration of President Donald Trump’s so-called travel ban, furthering the legal fight over the president’s attempts to bolster border security.

While the Justice Department says it will appeal the ruling, it marks yet another setback for the president’s much-criticized plan to bar entry into the country from people from several majority-Muslim countries.

Judge Derrick K. Watson blocked part of the ban—the latest version of which was set to go into effect on Wednesday. Trump’s ban would have barred certain travelers from Syria, Libya, Iran, Yemen, Chad, Somalia, North Korea and Venezuela from entering the country. Watson suggested the ban violated immigration law.

The order from Watson stops Trump’s order except for restrictions on people entering the country from North Korea and Venezuela. The state of Hawaii and several citizens sued the Trump administration in response to the ban.

Tuesday’s order from Judge Watson is the third time Trump’s travel ban has been challenged in court, according to the Los Angeles Times.

The third iteration added two non-majority Muslim nations—North Korea and Venezuela—in an apparent attempt to skirt the notion that it was intended to bar adherents of a specific religion from entering the country. At the time, the American Civil Liberties Union said the addition of the two nations didn’t “obfuscate the real fact that the administration’s order is still a Muslim ban.”

Earlier versions of Trump’s ban had restrictions on a seemingly arbitrary list of people who had “close relations” with people in the United States. The second iteration of the ban blocked people from entering if they were grandparents, grandchildren, aunts, uncles, nieces, nephews, cousins, or fiancés of people within the United States.

The United States Supreme Court has ruled on parts of Trump’s travel bans and partially lifted injunctions on previous versions of the plan in June.