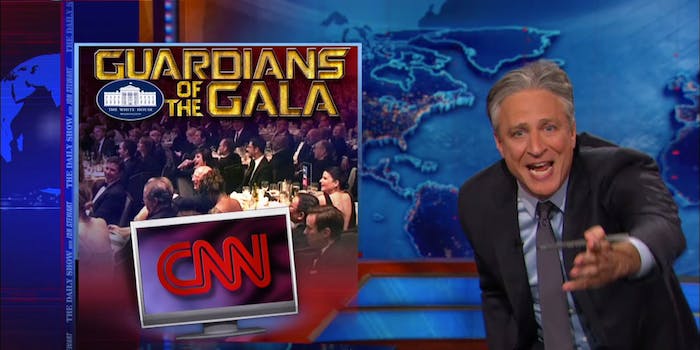 There was civil unrest in Baltimore Saturday night, but you wouldn't have known it by watching CNN.

Baltimore hosted massive protests Saturday night following the death of Freddie Gray in police custody, but the largely peaceful demonstrations that later turned violent were nowhere to be found on CNN.

The news network chose to cover the White House Correspondents’ Dinner instead. Their choice was ripe for a Daily Show takedown, and on Monday night, Jon Stewart delivered.

Stewart first mocked news organizations for interviewing their own reporters about the famous people they met, but he saved the brunt of his criticism for CNN, which chose to cover the dinner over the protests, which have now led to clashes between protesters and the Baltimore Police Department.

Adding insult to injury, in response to Twitter criticism, one of CNN”s anchors told viewers that they could look up protest coverage online.

The surreal spectacle and The Daily Show‘s coverage are already being compared to the dystopian world of The Hunger Games—and not just because Jessica Williams basically portrayed Effie Trinket bemoaning the protesters ruining the capital’s biggest night.

The White House Correspondents’ Dinner gives out more than $89,000 in scholarship money, and yes, the recipients are honored at the dinner. But when it came to that part of the night, CNN cut to a commercial. In response, Stewart called for the network to at least be honest with its viewers about “Nerd Prom.”

“If you’re gonna ignore major events to put on bowties and blow yourselves, fine, do it—you’re consenting adults,” Stewart said. “But don’t use that scholarship money to clean yourselves up afterwards. All we ask is that you be honest about what you do.”