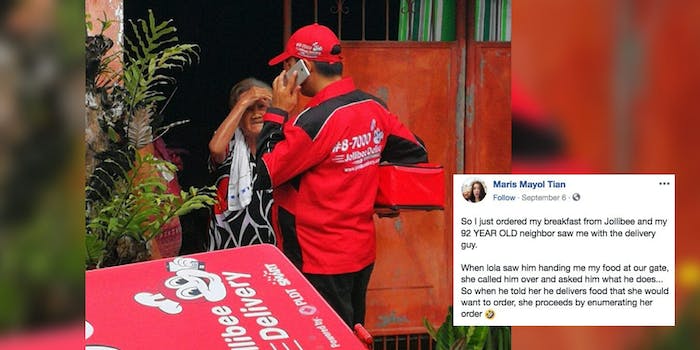 Nanay wanted her Jollibee immediately, and not a minute longer.

A fast food delivery driver has become an international sensation after being flagged down by an elderly customer and given her order, right on the spot.

According to a viral Facebook post from Maris Mayol Tian, who lives in the city of Bacolod in the Philippines, her delivery man was whisked away by a neighbor of hers after he had dropped off her order.

Tian had ordered from Jollibee, a popular international Filipino fast food restaurant chain. After paying, Tian’s neighbor, Nanay, noticed the driver handing Tian food, and called him over, asking him what he does. The driver, Elpegie Palmares Sicor, told Nanay he delivers food. Immediately, she begins listing off her order to him, expecting him to take it down. After all, that’s his job, right?

“I honestly thought he would just ignore her, laugh and be on his way, but he actually took out his own cellphone, dialed a number, and ordered for her!!!” Tian wrote on Facebook, posting a photo of Sicor calling his restaurant for Nanay, a box of her own Jollibee delivery in the foreground.

Since its publishing five days ago, the post has received more than 338,000 reactions and 52,000 shares, making Nanay and Sicor go viral across the Philippines and beyond.

So I just ordered my breakfast from Jollibee and my 92 YEAR OLD neighbor saw me with the delivery guy.When lola saw…

“Lola is so cute,” one commenter wrote of Nanay.

“The driver had compassion and that’s really commendable,” another person commented on Tian’s post.

Tian told BuzzFeed News that she didn’t expect her post to go viral, but that it felt nice sharing positivity with others online.

“I found that really cute,” Tian said. “Not a lot of young people pay attention to old people, but he did, so I ran inside the house to look for my phone and took a photo.”

Sicor told the publication that he had been working for Jollibee for nearly three months and saw helping Nanay placing her order as part of his job in customer service. While he said he didn’t know Tian had taken a photo of him and made the post, he said it felt great to do something good.