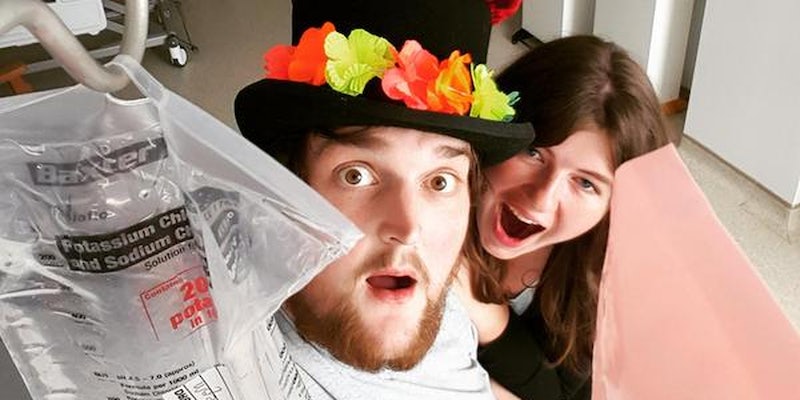 Even when dying, the Brits do comedy better than us.

Young and overworked but otherwise in perfect health, John Underwood had every reason to think his girlfriend was just being dramatic when she insisted he might have cancer—until he nearly collapsed on a London Underground train.

But somewhere in the middle of his journey from denial to the realization that he had been dying of lymphoma for months, Underwood retained his sharp sense of humor. On Tuesday, in conjunction with the start of his chemotherapy, Underwood took to his blog to give the Internet the wryest description of a cancer diagnosis in recent memory:

The awkward thing about spending two months telling your girlfriend that she’s an idiot for Google-diagnosing you with leukaemia, of course, is when she turns out to be very nearly correct. Ought I to regret, to recant the conversation above and the dozens like it, or is it just inevitable that one nervy partner in a million will accurately call a cancer diagnosis eight weeks before a doctor appears on the scene? I’m more inclined to chalk it up to extremely long odds than insist she does an AMA on how she can smell aberrant cell division, but perhaps that’s just bias.
…
“We’ll know more tomorrow,” as it turns out, is a deeply loaded phrase when used by a haemotologist, because what it actually means is “we’ll know more when I biopsy your bone marrow with this colossal syringe.” The technique is actually called a ‘punch biopsy’, and I just looked up the tool they used to do it, and now I wish I hadn’t.

The experiment calls to mind the fabled comedy routine of Tig Notaro, who worked her diagnosis into her standup while she was still processing it, and set a new standard for comedians incorporating their real lives and even the most serious subjects into their material.

For Underwood, the writing seems therapeutic, a distraction as well as a productive measure. He intends to write until he either fights his way through the disease or dies trying—”assuming that I stay alive long enough to write another column,” he said in his first blog post. “You don’t get this sort of suspense on Comment is Free.”

In the meantime, he’s asking readers to donate to the British charity Anthony Nolan, which matches stem cell donors and recipients. In the two days since his crowdfunding page for the charity went live, he’s met and exceeded his fundraising goal repeatedly. The current total stands at more than £24,000 ($37,000).

There we go. Twenty bloody grand. Please enjoy this extensively modified celebration hat and THANK YOU OH MY GOD pic.twitter.com/JLxfqFuyRP

He’s also been spreading the jokes as far as he can on his Twitter, as his story goes viral:

Spilt tea on my chemo schedule. Extremely on brand, or just a sign that my limbs are wasting away? You decide. pic.twitter.com/QnPK9O19mb

It’s always harrowing finding meaning in such deep human tragedy, let alone culling it for laughs. Still, we were so inspired by Underwood’s approach to his earth-shattering news that we did our best to meet him on his own terms in the email interview he shared with us—all from his current home in a St. Bart’s hospital bed.

Are you currently still alive?

It really depends how long you take to publish.

How is St. Bart’s treating you?

Bart’s (with which you may be familiar from Sherlock) is a marvelous place to have diseased blood. Despite the rarity of my flavor of cancer, someone here has actually treated it before! I wouldn’t go so far as to recommend a stay next time you have some downtime, but there are certainly worse situations in which to be maybe dying.

Is it Hodgkin’s or non-Hodgkin’s lymphoma? Is there a timeline involved?

It’s one of the non-Hodgkin’s lymphomas, although most of them are (never understood how Hodgkin managed to sew up the lymphoma-naming racket). Unfortunately, hepatosplenic T-cell lymphoma is sufficiently rare that there’s nothing as sophisticated as a prognosis available—it’s only been diagnosed a couple of hundred times since being identified in the ’90s. All we really know is that roughly two in three people have some sort of response to chemo, so for now my main aim is to get firmly on the right side of that fraction and stay there.

Can you talk a little about why you wanted to blog about this? What if you’re throwing important survival energy at the Internet instead of cancer??!

Honestly, survival energy is a nonsense concept. If I weren’t blogging and charging about on Twitter all I’d do is read, watch poisons drip into my arm and wait for someone to bring me a cup of tea—it’s not as if I’m wasting time I’d otherwise use for cleaning my chakras or eating avocado. Plus, after years of largely living on the Internet I can’t really think without a laptop anyway.

Your CV says you used to write for a film website, so please tell us what are your favorite films about cancer and dying young!

I think The Princess Bride qualifies re: dying young—even with Miracle Max lurking in the wings, having 50 years pumped out of your body in one go is a pretty spectacular exit. And nobody could fail to enjoy the prospect of Jack keeling over at, or shortly after, the end of Jack. Unfortunately, there has never been a good film about cancer.

You’ve raised nearly all of the £10,000 you were trying to raise for Anthony Nolan in under 2 days. How does that feel?

We’re past £13,000 now! I’ve put up the total four times and it keeps going, so obviously I’m thrilled—every new stem cell donor on Anthony Nolan’s register costs them £100, so cash donations are just as important as jars of spit. It’s lovely to have something positive to do, and obviously I get to feel gloriously smug as the counter creeps up.

Did you ever finish Right Ho, Jeeves?

I can pretty much recite Right Ho, Jeeves. Wodehouse is great to read in hospital, because the plots are secondary to the fun of his language—it doesn’t really matter if you doze off or turn two pages, you can just relax back into the prose.

You can follow Underwood’s future posts on his website. May there be many, many, many more to come.