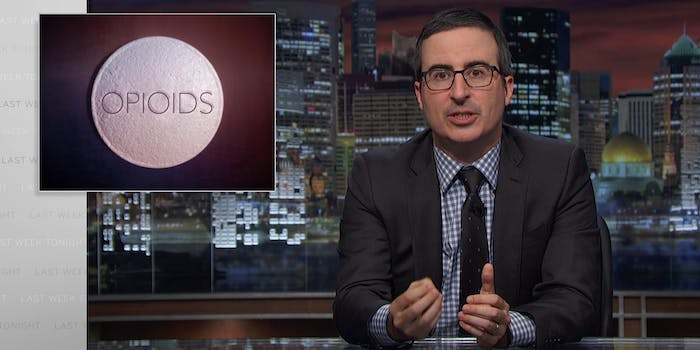 John Oliver’s breakdown of the U.S. opioid epidemic should be required viewing

More than 2.6 million are addicted to opioids in the U.S.

Having already set his sights on pharmaceutical companies for its outrageous practices, John Oliver once again took them to task for their part in helping create the opioid epidemic the U.S. currently faces.

More than 2.6 million are addicted to opioids in the U.S., many of whom started out with a prescription to a painkiller; some of them eventually turn to heroin because it’s cheaper than other painkillers, and that’s leading to a rise in overdoses across the country.

As Oliver explains, there are a number of factors involved in the rise of opioid addiction, most notably misleading information from pharmaceutical companies (who were eventually fined heavily for their marketing) and a dramatic increase in prescriptions for all kinds of pain. Doctors are being encouraged to try and use other methods to help treat their patients’ pain, but in some areas of the country, those alternative solutions aren’t as readily available as opioid prescriptions.

“There is no one simple answer here,” Oliver said. “This is going to take a massive effort and a significant investment. It won’t be quick, it won’t be cheap, and it won’t be easy.”