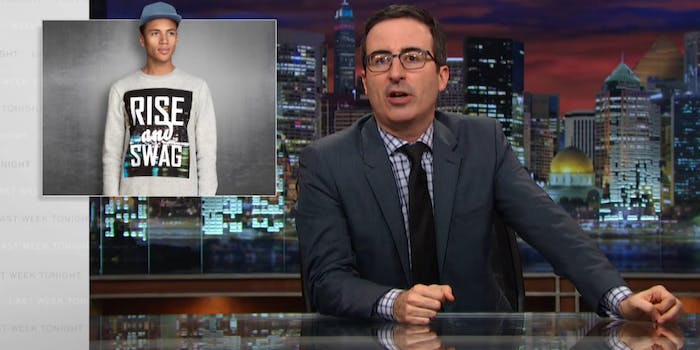 You don't want to think about where your clothes come from. But John Oliver is going to show you anyway.

We love to delude ourselves about cheap clothing. It’s easier to concentrate on how much money you saved on a $30 outfit than how much suffering went into the garment to make it so cheap.

There’s no better proof of this than the growing list of sweatshop scandals from brands like Gap and H&M, which make headlines every few years before vanishing from the public consciousness. In Sunday’s episode of Last Week Tonight, John Oliver took a hard look at so-called fast-fashion retailers, which have an astonishingly rapid turnaround for new trends—but often rely on child labor to cut their production costs.

Unlike patent trolls or the failures of the IRS, sweatshops can’t be blamed completely on some faceless political villain. They’re an evil in which we are all complicit—although as Oliver points out, they’re easier to ignore when media outlets are so quick to dismiss overseas labor scandals in favor of cheap new trends.

Given the viral power of Last Week Tonight, we imagine the PR departments of Walmart and Joe Fresh are scrambling to think of a clever response to Oliver’s cheap food delivery. Good luck with that.