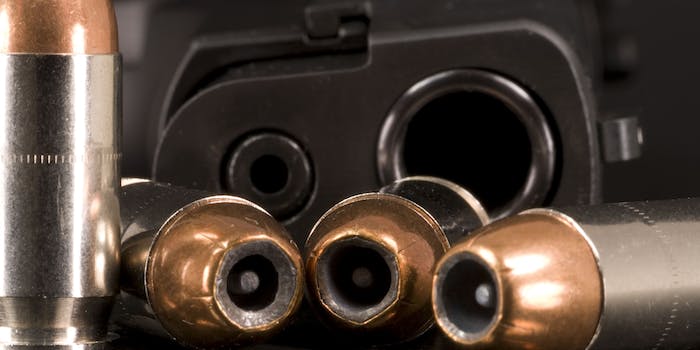 John Crawford III was shot in the back.

A grand jury on Wednesday found two police officers not guilty of misconduct for shooting an African-American man in the back at a Dayton, Ohio, Walmart. But newly released surveillance footage may prove consequential when it comes under review by the Justice Department.

John Crawford III, 22, was killed on Aug 5 after police responded to a man reportedly waving a gun around in the store. The alleged weapon turned out to be an air rifle from the Walmart sporting goods department. Released to the public this week, surveillance footage from inside the store appears to contradict the official story—that Crawford was brandishing the weapon at other customers, including children.

The surveillance video, embedded below, appears to show Crawford pick up the toy gun from the sporting goods aisle while calmly walking around the store talking on his cell phone. He occasionally swings the weapon in his right hand, but the barrel remains pointed at the ground. At no point in the video does Crawford threaten any children with the toy gun, which is apparently what another customer, identified as Ronald Ritchie, told a police dispatcher when he called 911.

Warning: The video below is both graphic and may not be suitable for all readers.

Less than two minutes into the video, police officer Sean Williams and his partner enter the store with guns drawn. It’s difficult to tell when the officers first start shooting because there’s no audio. According to the 911 tape, however, it appears as if the officers began firing immediately after seeing Crawford—hitting him twice—though it is unconfirmed at this time if the audio is, in fact, properly synced. Police claim that Crawford did not obey their commands to drop the weapon.

Crawford’s family told the press they were “extremely disappointed, disgusted and confused” by the grand jury’s decision not to indict the officers.

On Thursday, the Guardian reported that Williams, the officer who shot and killed Crawford, had less than two weeks prior received what officers described as a “pep talk” on how to deal with armed suspects.

Officers were reportedly shown a slideshow (see below) that invoked “their loved ones and the massacres at Sandy Hook, Columbine and Virginia Tech while being trained on 23-24 July on confronting ‘active shooter situations’.”