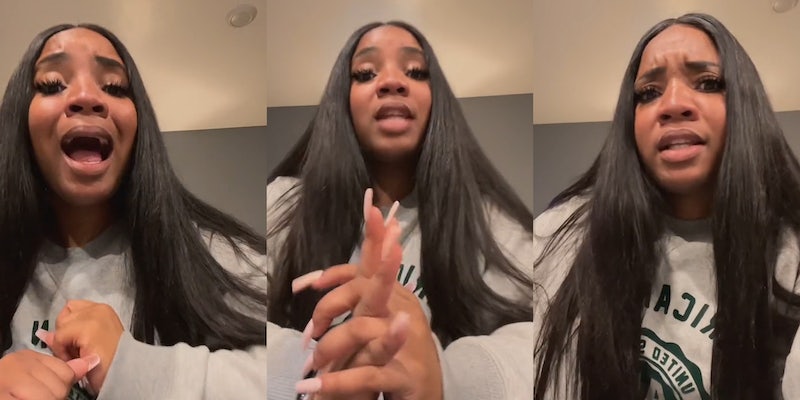 ‘Same resume. Same qualifications’: Black job applicant says she only got interviews when she listed her race as white on applications

A Black TikTok user has sparked discussion after claiming they only started getting responses to job applications after they listed their race as white.

In a video with over 689,000 views, TikTok user Dee (@dee.realz) says that she has been “angrily and aggressively looking for a new job” for the past six months, resulting in her submitting at least three applications per day.

After changing her resume three times and switching from using her first name to her middle name (“so it sounds a little less ‘ethic,’” she explains), she still received no responses to her applications.

However, Dee says she stumbled across a TED Talk which advised changing one’s race to white on a job application to receive more responses.

It’s unclear which TED Talk Dee is referring to, but it may be Janet Stovall’s talk on “How to get serious about diversity and inclusion in the workplace.” In the talk, Stovall cites a study where fake job applications were sent to companies with ‘white’ and ‘Black’-sounding names.

“…If your name is Molly or Connor, you’ve got a 14 percent better chance of getting a callback on your resume than if your name is Shanice or DeShawn,” Stovall says. The full study is available here.

Taking this advice, Dee says she started listing herself as white on job applications.

In the United States, “Title VII of the Civil Rights Act of 1964 prohibits employers from asking about ethnicity, race and national origin,” per Human Resources MBA. Furthermore, the U.S. Equal Employment Opportunity Commission (EEOC) notes that “employers should not request information that discloses or tends to disclose an applicant’s race unless it has a legitimate business need for such information.”

Still, some employers may ask questions about race to meet legal requirements or to meet internal diversity standards, per Chron. Discriminating against Black applicants based on this information, as Dee’s video is implying, is illegal.

While it may be illegal, the practice seems to still be underway. A 2017 article under Harvard Business School’s Working Knowledge vertical reviewed a study in which applicants submitted both minority and ‘whitened’ resumes to various companies.

“…Companies are more than twice as likely to call minority applicants for interviews if they submit whitened resumes than candidates who reveal their race—and this discriminatory practice is just as strong for businesses that claim to value diversity as those that don’t,” the study concluded.

On TikTok, users chimed in to support Dee’s findings.

“That’s how I got my jobs. It’s so sad that it’s gotta be this way,” one user wrote.

“I put ‘prefer not to disclose’ on the race section. Got 6 offers in a week,” another claimed.

“As an HR professional blind resumes are the way to go!” a third shared. “There’s soo much implicit bias it’s crazy. Omit anything that shows EEO data.”

Update 9:14am CT Sept. 11: In an Instagram DM exchange with Daily Dot, Dee says she landed the interviews after changing her race on Indeed to “white” after previously not having declared a race. She has since already had one of the four aforementioned interviews, and while her race did not come up, she says the position was not a good fit for her.

In future interviews, “if the topic [of race] comes up, I will most certainly ask them if it matters what race I identify as. As it should not,” Dee stated.

“The response to my video was truly heartbreaking…So many people were experiencing the same setback. It truly shows that we have a lot of growing to do as a society, and as a Black gay woman I feel that I should be accepted for who I am and also for my ability to do the job,” she continued. “Many of the people in my comments were qualified or overqualified for the positions they were applying for…It is unfortunate for these companies because they are truly missing out on amazing employees because of their prejudice.”

In the meantime, Dee says she is still seeking work. “I’m actively looking for an entry-level marketing position,” she wrote, “and if anyone is looking to hire a Black woman, I’m ready to start working.”