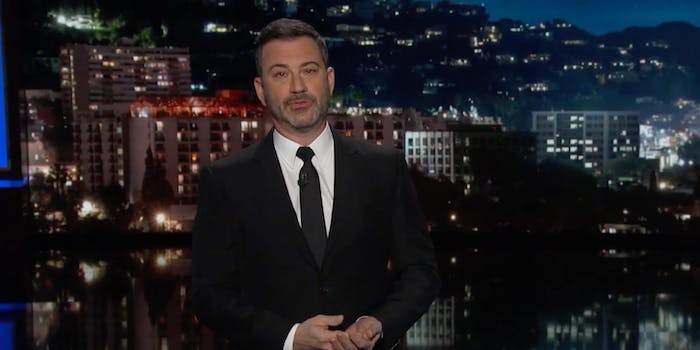 Literally the day after International Women’s Day, Jimmy Kimmel is being accused of paying men more than women by a former employee.

Jack Allison, a former writer for Jimmy Kimmel Live, shared what he says are emails from Kimmel discussing his pay. In the first email shared, Kimmel shamed Allison for telling a woman coworker that he was given a raise that allegedly put him $1,000 a week ahead of her.

“When I gave you a raise and a good deal of praise and asked you to keep it between us, you did the opposite. Not only did you violate my trust, you made others feel bad about themselves,” Kimmel allegedly wrote. “We spoke about this–quite emotionally, as I recall–you regretted having done it and I put it behind us. Completely.”

But unequal pay wasn’t Allison’s only concern with the show.

In a Twitter thread detailing his experiences, Allison described a working environment that was nonchalant and even hostile about mental health.

Allison said he took a day off for mental health and then was “ostracized for nearly a year…because they didn’t believe me.”

The second email Allison shared included Kimmel allegedly saying that he, himself, believed the former writer about his mental health issues but that the staff “didn’t believe him.”

When a deadline was moved, Allison told the Daily Dot that he was unable to finish his work in time because he was experiencing a mental health crisis, and he “couldn’t get the jokes writing.”

“I believed you 100% (and still do, btw) Many on the staff did not,” Kimmel allegedly wrote in the second email. “Some in the ranks were angry with you for using a depression as an exaggerated excuse to save your job and for taking advantage of my nature.”

Allison said that he chose to share the emails after he heard that former presidential candidate Pete Buttigieg will guest host the show. One of Allison’s main grievances with the show is that staff behind the scenes allegedly say homophobic and anti-gay slurs, which is especially significant because Buttigieg was the most successful, openly gay candidate for president.

Allison added that he thinks that writers shouldn’t have to write jokes for political candidates at all.

“I think it’s wrong that late-night writers are forced to write material for political candidates and people in politics,” Allison said. “I think that Trump hosting SNL is a pretty good example of why it’s wrong to require writers to write stuff for these politicians.”

After he aired his concerns about Buttigieg guest hosting, Allison said he “might as well just do all of it,” which prompted the Twitter thread.

In addition to the way Allison says he was treated while working on the show, people online are also upset about the illegality of retaliating against employees for sharing their salaries.

The tone of the email, as well as the details of its contents, rubbed people the wrong way.

“The tone of this email is so f*cked up,” Twitter user @cherrycordial98 wrote. “How are you gonna manipulate someone this gravely and make them feel like telling a coworker about their wage disparity is somehow worse than your child being hospitalized. F*ckin jeez Jimmy.”

The Daily Dot reached out to “Jimmy Kimmel Live” via ABC but did not receive comment by publication time.