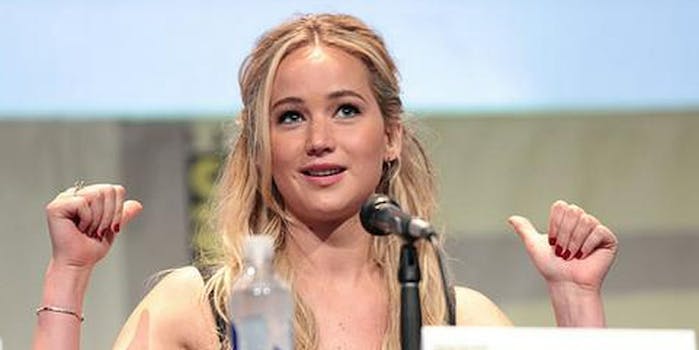 How the Sony hack made Jennifer Lawrence angry at herself

The actress shared an unfortunately relatable story about wage discrimination.

Jennifer Lawrence is fed up with the wage gap. In the most recent mailing of Lenny, the newsletter from Girls creators Lena Dunham and Jenni Konner, the actress explains her response to learning in the Sony hack that she earned less than as her male costars Bradley Cooper, Jeremy Renner and Christian Bale.

“It’s hard for me to speak about my experience as a working woman because I can safely say my problems aren’t exactly relatable,” Lawrence writes. She’s the highest paid actress in Hollywood today, with an estimated net worth of around 60 million dollars. But when hackers stole and leaked emails from Sony last year, the star found out just how much less she was making than her male costars.

Lawrence seems to have taken the wage gap as a personal failure. “When the Sony hack happened,” she writes, “and I found out how much less I was being paid than the lucky people with dicks, I didn’t get mad at Sony. I got mad at myself. I failed as a negotiator because I gave up early.” Lawrence’s feeling actually illustrates what many call “the ask gap,” the established phenomenon of women being less willing to ask for a raise.

Why might women be less than eager to speak up when it comes to money? Lawrence has an answer for that, too:

Spoiler alert: Lawrence also relates a story about sharing her opinion and having a man react like like he’s being yelled at.

Even if the dollar amounts aren’t relatable to most of us, Lawrence’s story offers confirmation that the wage gap is alive and well at every level of the pay scale. And it’s not a simple issue; race also widens the wage gap, with women of color earning much less than white women. New data also suggests a wage gap emerging along sexual orientation lines.

As for Jennifer Lawrence, she writes, “I’m over trying to find the ‘adorable’ way to state my opinion and still be likable! Fuck that.”

May we all be so inspired.