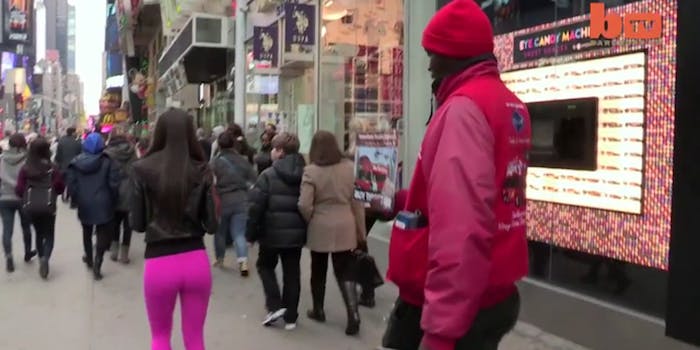 Butt selfies have recently been thrust into the Internet’s collective consciousness, and one of the most prominent figures is Instagram fitness blogger Jen Selter. The 20-year-old New Yorker currently holds the title for “World’s Most Instagrammed Ass.”

But who is the woman behind the behind? Selter recently gave a rare video interview to Barcroft TV, in which she expressed surprise at her posterior’s popularity, and detailed the butt bullying that’s followed with her rising Internet profile:

“With every picture I add, if it has a little butt in it, I get ‘fake butt,’ ‘butt implants,’ ‘Photoshop.’ I could go on and on. It doesn’t offend me. I know my butt is real and it’s hard work. You can’t fake fitness.”

Some other highlights: The three men watching her walk by and biting their fists, Lenny and Squiggy-style, proclaiming, “It’s bigger than Kim’s!”

Selter says that even though Rihanna is now following her on Instagram, this isn’t about fame, but getting people into the gym and focusing on health. Still, her Internet cache can’t be denied. Much like #Lawrencing, #Riccing, and #LeBroning, #Seltering is now a hashtag people use on Twitter. It’s a movement. But for how long?