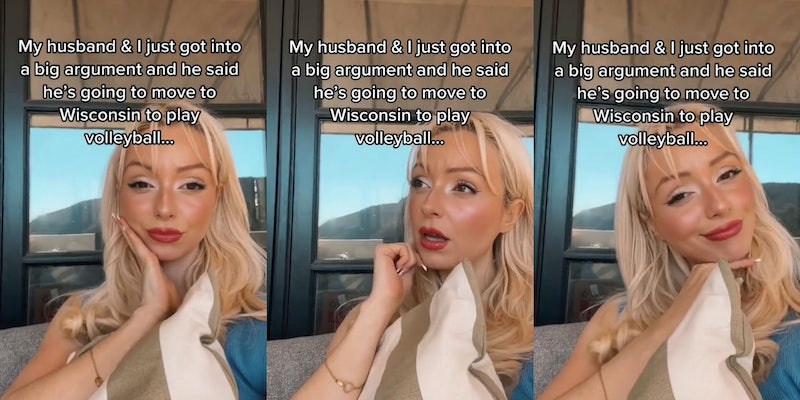 ‘Left a bad taste in my mouth’: Influencer slammed for joking about volleyball team’s photo leak

'That’s really sad to laugh at.'

TikToker Jasmine Chiswell is facing backlash after seeming to joke about the University of Wisconsin women’s volleyball players whose nude photos were leaked without their consent.

In a recent TikTok from Chiswell, who has over 16 million followers on TikTok and is known for her vintage styling videos, she says that after getting in an argument with her husband, “He said he’s going to move to Wisconsin to play volleyball.” Chiswell has since deleted the video.

The Milwaukee Journal Sentinel and USA Today reported that nude and partially nude photos of University of Wisconsin women’s volleyball players were leaked online without the players’ consent. The university said the images were “never intended to be shared publicly.”

Many on TikTok have expressed disappointment that Chiswell would seem to joke about such a situation. TikToker Ms. Ryan (@ms_ryan) stitched Chiswell’s now-deleted video saying she doesn’t “get the punchline” of Chiswell’s joke.

“Is the punchline of the joke the face that a group of young, college aged—some would say barely legal—women got their nude pictures leaked without their permission and that’s what your husband is looking at?” Ms. Ryan says in her TikTok, which on Wednesday had over 355,000 views. “It can’t possibly be the punchline, right?”

Ms. Ryan used the hashtags #badjoke and #clout in her TikTok caption.

Many commenters on Ms. Ryan’s video shared her negative reaction to Chiswell’s TikTok.

“Literally left a bad taste in my mouth,” @ghostguts333 commented. “There was no need for her to joke abt that.”

“I used to really love her content. Recently it has gotten so weird and I’ve stuck it out but I feel like this is my final straw,” @mattiemae96 wrote.

“I felt this when I saw. Like what’s funny? That’s really sad to laugh at,” @engelburtmeow commented.

The Daily Dot has reached out to Ms. Ryan and Chiswell via email.