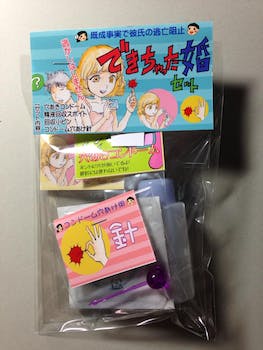 In an ideal world, you could prevent a breakup by communicating with your partner and reasserting your commitment to them. But we don’t live in an ideal world. That’s why there’s a gag gift toy item circulating in Japan that bills itself as a “breakup prevention kit,” because it comes with a gadget designed to make holes in condoms.

The kit also comes with a faulty condom with holes pre-poked, ready for use. There’s even a syringe and vial for collecting and storing semen. And while it’s clearly intended as a novelty gift, there’s actually some historical precedent for “shotgun weddings” in Japan, so it’s not inconceivable to think that someone might take the kit seriously.

Here’s what this insane thing looks like. So far it’s only for sale in a single bookstore in Tokyo, so don’t expect it to become a big-ticket item. But if you should happen to see your beloved come home with this one day, it’d be a good idea to sit down and have a talk.

The point of the “kit,” of course, is that your partner won’t break up with you if he thinks you’re pregnant. But if you’re so insecure in your relationship that you’re caught trying to trick your partner into making him think you’re pregnant, that’s not preventing a breakup—it’s doing the exact opposite.