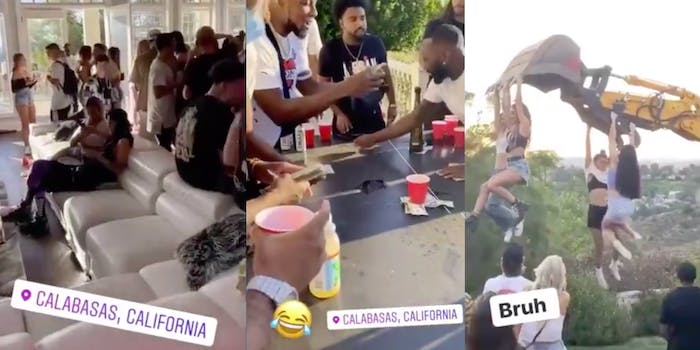 No social distancing, either.

Jake Paul is facing backlash online for throwing a house party filled with influencers, none of whom wore masks or practiced social distancing.

The YouTube star, who currently has over 20 million subscribers, held a day-long party after shooting a music video at his home in Calabasas, California. Some of the influencers in attendance included his fake ex-wife Tana Mongeau, Bryce Hall, Erika Gray, and more.

At the party, guests were photographed and videotaped drinking, gathering in small spaces together, and at one point, swinging from construction equipment.

Reporter Bill Melugin shared videos he acquired from attendees of Paul’s party and his neighbors. In a video from the neighbors, guests are seen hanging from heavy machinery and “holding on to the bulldozer like it’s a bull,” the filmer says.

After the party, Calabasas Mayor Alicia Weintraub expressed her disappointment in Paul and the attendees. Weintraub told Fox 11, “They’re having this large party, no social distancing, no masks, it’s just a big, huge disregard for everything that everybody is trying to do to get things back to functioning.” She added, “Something like this will not happen again.”

In May, Paul was charged with trespassing after accusations that he looted a mall in Arizona amid protests over George Floyd’s deaths.