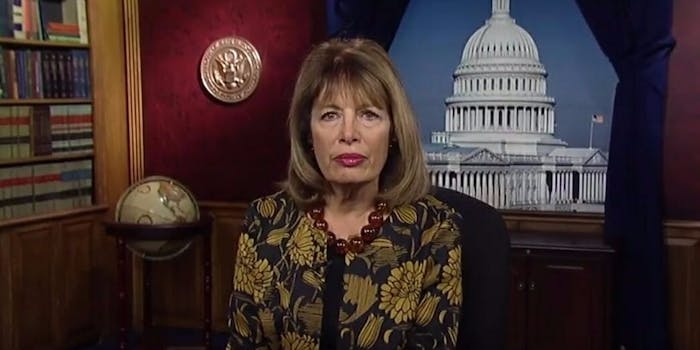 He 'held my face, kissed me, and stuck his tongue in my mouth.'

The #MeToo campaign has spread to Congress, with Rep. Jackie Speier (D-Calif.) leading the charge to reform the legislative office that handles sexual harassment complaints.

Speier posted a video to Twitter on Friday morning, detailing the time when she was a congressional staffer and a chief of staff “held my face, kissed me, and stuck his tongue in my mouth.”

Speier said she has reached out to current and former congressional staffers to share their #MeToo stories if they’re comfortable.

“There is nothing to fear in telling the truth,” said Speier, who was an aide to Rep. Leo Ryan in the late 1970s. “And it’s time to throw back the curtain on the repulsive behavior that, until now, has thrived in the dark without consequences.”

Speier also said she’ll introduce legislation next week to reform the Office of Compliance (OOC), which handles congressional workplace harassment complaints. She told Politico that the OOC is “constructed to protect the institution—and to impede the victim from getting justice.” She also called the OOC “toothless” and said it was a “joke.”

“There’s no accountability whatsoever,” she told the website. “It’s rigged in favor of the institution and the members, and we can’t tolerate that.”

According to a congressional aide survey conducted by Roll Call, four in 10 women believe sexual harassment is an issue in Congress and one in six say they had been victimized.

As it stands now, after an incident but before filing a complaint, victims are required to go through 30 days of “counseling” with an OOC employee. Following that process, they have 15 days to decide whether they want to pursue the next step: 30 days of mandated “mediation.”

After mediation, victims must wait another 30 days to file a complaint. The OOC allows anyone filing a complaint to ask to shorten the counseling period and doesn’t require them to be in the same room as the accused during mediation, but Speier put little stock in those measures.

“Can you imagine a victim who’s been sexually harassed who attempts to file a complaint and then is told they’ve got to go through three months of biting their tongue and continuing to work in that kind of environment?” she asked. “You’ve just been sexually harassed and you’re told you have to be ‘counseled’ for 30 days. Are you kidding me?”

As Politico notes, Speier has introduced a similar bill to reform how the OOC operates every year since 2014.